With Michael Jackson having moved to the upstairs bar I had started to think that no one would ever be able to write another big well-written, full-colour book on the world of beer. Luckily Tim Hampson assembled a bevy of beer writers to put this 350 page worldwide beer crawl together, each of them experts in the beers of their own country. Hence from Italy we have Lorenzo Dabove, regular on the ITV Wales Food Show, well he featured in 2 episodes, exploring the weird and wonderful bottle shapes and flavours of Italian craft ale renaissance brewers. In recent years Italian brewers have realised there is a market for individually crafted ales as opposed to the mass produced Euro lager that most people think of as Italian beer. There's more to Italian beer than Nasty Azzuro!

Similarly, experts from other countries provide other chapters; Alastair Gilmour for the UK, Corad Seidl for Austria, Joris Pattyn for Belgium to name 3 of the 13 contributers to this book.

There is a very extensive section on the craft breweries of the USA, which over the last 30 years has seen over 1400 new breweries start up, producing everything from Victorian-style IPAs to Belgium-style brews. Even the multi-nationals are trying to cash in on the craft-brewery revolution, with Coors producing its Blue Moon range of beers which include a a Belgium-style wheat beer and a Czech-style lager. It's just a shame that Coors Brewery closed down their museum in the UK, formerly the Bass brewery Musuem.

Most of the pages of the Beer Book feature reviews of 2 beers from a selected brewery with a bit of history and the photo of a beer bottle. Added to that we have beer trails in selected countries with maps and articles on beer styles liberally spaced throughout the book. It's quite enjoyable in reading the beer book to rediscover old favorites such as Cwmbran Crow Valley Bitter and some tasting notes on something new and interesting sounding. For instance, the Dogfish Head brewery of Delaware produce a beer called Midas touch whose ingredients include Muscat grapes, honey and saffron! Not a beer that I would drink a lot of but definitely one to try.

One minor fault with the book is that it says that Felinfoel Brewery has been in existence since 1878 which should come as a surprise to the Lewis family who have been brewing there since the 1830s!

All in all The Beer Book is an excellent reference book and would make an excellent Christmas gift for the enthusiast or even anyone vaguely interested in the world of beer, my only gripe is where I am going to find room to put another book about beer on my already bulging bookcase! 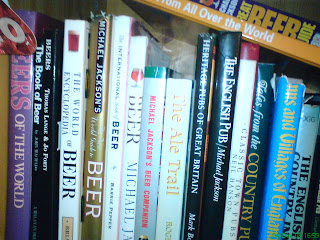 Above: part of the Brew Wales research libary