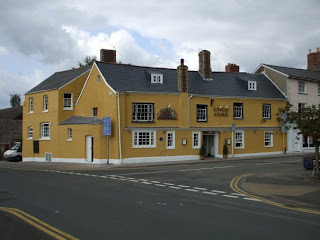 The King's Arms in Abergavenny, which has already been home to a CAMRA beer festival is now home to the only cinema in the town. Owner Ben Jones has converted one of the outbuildings, originally home to Delafields Brewery into a 60 seat cinema. So as well as taking a meal at this ancient brew pub (it's also home to the Tudor Brewery) you can sit back and enjoy a blockbuster with a pint.
Now what films will be shown at this cinema? Brew Wales have already put together a list of what we will like to see there:
The previous cinema is now a chav-palace called the Coliseum run by JD Wetherspoons. 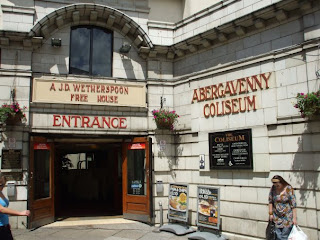 If you do visit the Coliseum, make sure you have a look at the poster with a member of the Klu Klax Klan on it! I'm not joking, it's near the window. The poster is an advert for the film "Birth of a Nation", directed by DW Griffiths, who was of Welsh parentage.

The controversial poster in your Abergavenny 'spoons
For more information on this film and its view of history, check out the Wikipedia page on Birth of A Nation