Nanny tells you not to drink at home! 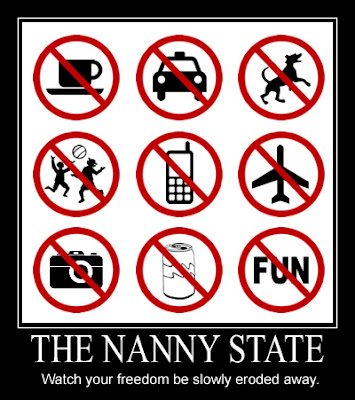 I recently saw this article over at the South Wales Evening Post (that's a Swansea paper for those of you outside of Wales):
Campaign puts spotlight on having drink at home
Oh what now!
Yes the Nanny State is back and having driven smokers out of pubs and into their homes to enjoy themselves with the supermarkets laughing all the way to the bank, Chief Nanny Dr Tony Jewell now says that we are drinking too much at home!

Nanny Jewell said 60 per cent of people between 45 and 64 years old drink above the recommended level in Wales.
Well that's got nothing to do with you or the Government!

"It costs the NHS in Wales £70 million a year," he said.
But how are those figures worked out and how much do we as taxpayers contribute to the NHS and Nanny Jewell's salary? All of it of course!

"Drinking at home has increased, in the past people would say they are going to the pub later for a drink, now they drink at home. If you drink at home there is a pressure that if you open a bottle of wine, you finish it.
And, why do people drink at home? Because you have forced them out of the pub where they used to go for a drink and a smoke.

"I think all of us underestimate the number of units we drink."
Alcohol units are meaningless. Don't believe me? Then check this out:
Liver specialist Dr Nick Sheron, of the Alcohol Health Alliance UK, says these limits were devised by civil servants with "no good evidence" for doing so.

This part of the Welsh Government, ie taxpayer funded, Change4Life nannying. There is an interesting little unit checker on the website in which you input what you have to drink and it tells you the amount of units you have drunk, with an option to share the result on Facebook and Twitter, unfortunately the Facebook plugin is not working, still its only a Government IT project, it's not as if they have to worry about spending our money is it?
There is a good comment on the piece by an award-winning South Wales brewer:
“What an absolute load of tripe, there is no proven medical evidence to support the recommended daily units of alcohol, in fact as a leading deputy editor of the British medical journal and a member of the working party that established the new safe limits in 1987, which were reduced from fifty one units, to twenty one units said when asked why, " we just pulled them out of the air"

There was no reason given and no medical proof given to back up this decision.
As for the costs to the NHS these figures are seemingly plucked from the air also, with no balancing figures for the beneficial contribution alcohol makes by keeping most people who drink it less stressed out with modern life and its demands.
Imagine working all the hours you do have to work these days with no release at all other than less than a pint of beer a day?
I think stress related costs to the NHS and to society would be far greater. Not to mention also that costs are more widely reported in modern days that before and I wonder if any individual source of cost has been reduced to the NHS in the last 20 years?
Its time to say enough!
Its a modern world and we live in a modern democracy, damn it we are even grown up tax paying adults, leave us alone to enjoy a simple natural product.
For far too,long the minority have had the biggest voice in this issue, I say enough is enough!”

In other news today, the Government Propaganda from the BBC has been identified by Chris Snowdon and picked up by Pete Brown as well, both posts are well worth reading.