Model Inn reopens as a restaurant 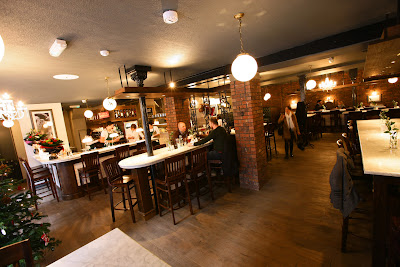 After being closed for almost a year, one of Cardiff's oldest pubs, the Model Inn on Quay Street has reopened as a restaurant called Greenwood & Brown, named after the wine merchants who used to own this pub.

Originally called the Ship on Launch (this is Quay Street after all), a building on this site is clearly marked on John Speed's map of 1610 and was renamed the Model Inn, according to tradition, after Cromwell's New Model Army were billeted there during the civil war.  In the nineteenth century the Ship on Launch Tavern even brewed its beer in an on site brewery.

In 1956 The Model Inn was purchased by Cardiff brewers SA Brain, from wine merchants Greenwood & Brown, together with 4 other pubs for around £100,000. The other pubs were the York Hotel on Canal Wharf (Still standing but has been closed for 20 years and is awaiting demolition), Vulcan (still open, just), Ship Hotel (closed) and the Cross Inn on Newport Road, Rumney (still open).

It's good to see this building be used again and in this economic climate its good to see a brewery investing in a building as Pub Companies do not seem to want to, or even have the money to do so. There is already an excellent pub a couple of doors away, the City Arms, so there would have been no point in having another excellent pub almost next door.

After major internal and external refurbishment – and a change of name – Greenwood and Brown, on Quay Street in Cardiff city centre, has today (Tuesday 6th December) opened. Formerly known as the Model Inn, the Brains owned venue will operate as a bar and grill, serving simple, great quality food.

The Model Inn has been part of the Brains family for more than half a century. In 1956 the company bought the pub from a local wine merchant, Greenwood and Brown – which provided the inspiration for the name.

Philip Lay, retail director at Brains, explains: “Food is becoming an increasingly important part of our business, and across our managed pub estate now represents 35% of total sales. Greenwood and Brown therefore feels like a natural progression for us. We already have a great pub on Quay Street in the City Arms, which serves 35 different types of beers and ciders. This offers something completely different, and we think it will be a great addition to the area.”

Greenwood and Brown is open Tuesday to Saturday from 12pm to 12am. The menu, which relies heavily on Welsh suppliers, includes steaks, fish and seafood, and a range of daily changing dishes including risotto, seafood chowder and rack of lamb. And on the bar there’s a mix of premium bottled beers, wines and spirits, as well as classic cocktails.