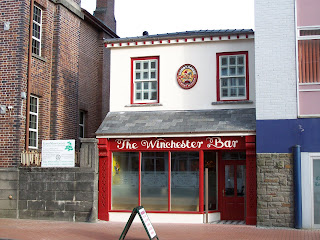 The award-winning Rhymney Brewery have completed their transformation of their brewery tap, the Winchester, into the pub in the above photo. Etched glass windows, a fireplace, a mosiac floor on the entrance etc have all gone into what looks like a stunning pub.
This is what looked like before: 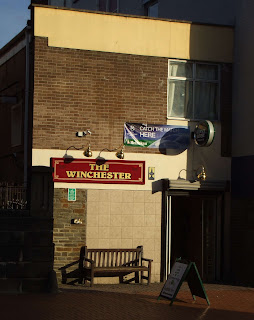 Not yet visited the new pub yet but looking forward to it.
Have previously written about the pub here. and below is what I wrote about the proposed refurbishment:

The Castle Street pub is situated between the Castle Hotel and the 1930s former Water Board Offices (Social Services now) and was converted to the Rhymney Brewery's first pub and Brewery Tap back in 2006, the premises before then had been a commercial unit, even used as a tanning saloon. Originally on this site, there stood a pub called the Beehive which dated from the 1840s but this was demolished when the next door Castle Hotel was built in 1967.

The planned refurbishment for the Winchester will see a Welsh slate roof installed, replacing the 1970s flat roof and the frontage will be opened out and improved with large etched glass windows allowing natural light to illuminate the interior of the pub. A Victorian style door will be installed to the side of the etched windows and the entrance floor will be tiled with a 'Rhymney Brewery' mosiac.
The pub sign will be hand-painted and a Rhymney Hobby Horse sign will be embedded into the outside wall. A chimney stack will also be built on the side to enable a real fire to be put into the pub! Smokers will be catered for with a smoking solution to the rear of the building.
The Winchester was a breath of fresh air when it opened in Merthyr, the first pub in a generation to regularly have a dark mild on cask in the town – the former Champion Beer of Wales, Rhymney Dark as well. Having been impressed with the Winchester since it first opened and seen the plans for this refurbishment, well hardly a refurbishment, more of a de-refubishment and recreation of a Victorian beerhouse.