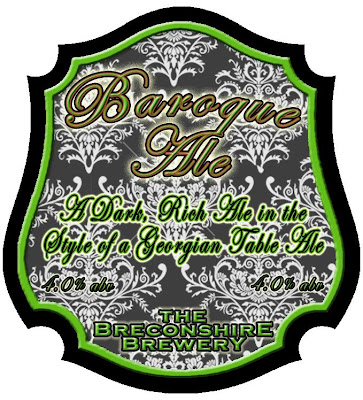 Award-winning brewer Justin 'Buster' Grant of Breconshire Brewery has taken a look back into the history books with his latest seasonal brew for the Autumn.


Baroque Ale is a 4.0% abv dark tawny-brown ale brewed in the style of the table ales that would have graced Georgian Britain. Sweet juicy malt flavours and a complex pallet are complimented by the gentle floral bitterness of Goldings hops, with Fuggles (both being some of the earliest cultivated hop varieties in the UK) providing a soft, grassy almost minty aroma.
This rich, dark ale is brewed with water drawn from under the hills of the surrounding Brecon Beacons National Park, and blend of pale, wheat and chocolate malts, all from Warminster’s traditional Floor Maltings, which give this beer its dark tawny-brown colouring and sweet malty flavours. Goldings and Fuggles provide the counterpoint of this extravagantly complex brew, which would have been one of the safest and most nutritious food sources of its time.
Brecon as a town is rightly famed for its beautiful selection of Georgian architecture, which has also inspired a highly acclaimed annual musicfestival, which takes place every October. During the Baroque period, (roughly 1600 - 1750 AD), European culture developed some of its most extravagant and complex expressions - in music, art, dance, architecture and some might even say politics.
Casks of this beer will be available throughout the Autumn, either direct from the brewery, from selected wholesalers or by telephoning the Brewery on 01874 623 731.