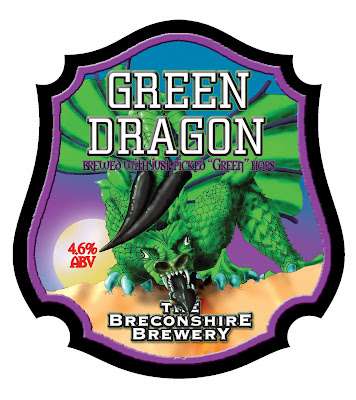 Justin "Buster" Grant, head brewer at Breconshire Brewery has brewed a special annual beer, made with hops picked on the same day as brewing the beer.
Usually hops will be dried and vacuum packed in order to preserve them but by using fresh hops some unique characteristics are passed on to the beer in the volatile compounds that can be lost through processing.
The hops were picked on the morning of the 9th of September at 11 am to be precise, at Little Lambswick Farm, near Tetbury Wells in Herefordshire and went into the boil at 3pm.

Green Dragon is described as a  4.6% golden ale, there is a gentle malty base of pale and wheat malts, with the just picked hops adding all of the remaining flavours.
An exceptionally fresh tasting beer with a gentle refreshing bitterness.

Green Dragon has now finished fermenting and has been released into the trade, look out for it in pubs across South Wales.