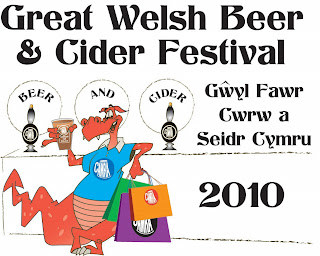 Lots of coverage this year with Media Wales filming 2 videos here and here as well as the piece on the cider and a piece in Wales on Sunday the week before the festival with an interview with Matt Otley.

Not forgetting the beer review of Great Orme Brewery Great Welsh in the South Wales Echo.

Dom over at Welsh Icons has uploaded photos of the festival at his Flickr site - well worth a look as are those from Rob at Travels with Beer and those from Andrew Wilcox who is the organiser of Shedweek and Shed of the Year.
The Assembly Member for Caerphilly, Jeff Cuthbert AM presented the Champion Beer of Wales Awards and there is a write-up on Wales Home here.
I've yet to see the copy of Playboy Magazine (Croatia) but I'm sure it will be a good article.

The winners of the cider competition were:


A great time was had by all who attended the festival and the next big one is of course the Great British Beer Festival in Earl's Court in August.