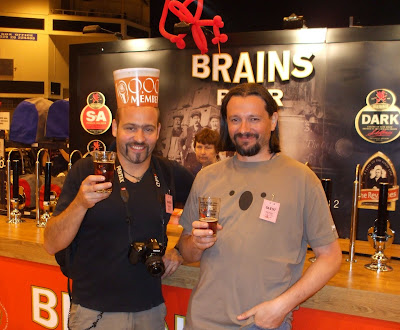 Well its been a busy week at the Great Welsh Beer & Cider Festival and this year we managed to attract attention from the Balkan media in the form of Domagoj Jakopvic Ribafish, assistant editor of Playboy (Hrvatska) Magazine Croatia. Riba as he likes to be known as, together with his photographer enjoyed themselves at the festival where they sample a wide range of beers and ciders, although the dark beers were a favourite.
On a side note, the late great Michael Jackson (that's the beer writer not the kiddy fidling nonce) used to write for Playboy in the 1970s so there is much more to that esteemed organ than the photographs normally just looked at.