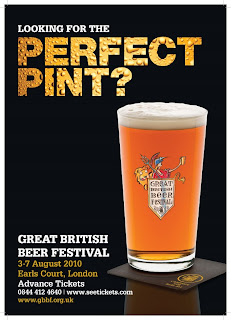 It's coming up to the first week of August soon and to all beer aficionados from across the world that can mean only one thing, yes the Great British Beer Festival will once again descend upon Earl's Court in London and I get the chance to drink as much Fuller's Chiswick as I can. Regular readers of this blog now my fondness for Fullers and the brewery staff are well used to me propping up their bar during the festival in-between dealing with the media.
This year will be my 20th year working at the GBBF and it is always a great social occasion, meeting up with friends who you have not seen for a year or sometimes longer. The Festival has come a long way since being held in Docklands arena and I don't mean just moving across London!
If you are interested in coming along check out the Great British Beer Festival website for opening times or if you are a CAMRA member come along and support CAMRA by working at the festival.
Meanwhile I'll leave you with some photos I took of the festival last year: