Failing pub company Punch Taverns has closed the doors on another of its pubs. This time the Engineers Arms in Baneswell, Newport, has received the death sentence from the Staffordshire-based company. The pub shut last week and rumours abound that Punch plan to turn this old Newport pub into residential accommodation. This two-bar pub was famous for its regular jazz sessions and attracted regulars such as author Alexander Cordell and journalist Mike Buckingham.

Unfortunately the heavy rents and overly-expensive beer that had to be bought via Punch, drove the customers away to cheaper, free-of-tie pubs such as Wetherspoons and the Pen & Wig. Hardly surprising that trade diminished to a point that the Engineers became unviable.

The Engineers Arms was formerly run by Welsh Brewers and served Bass and Hancocks HB. It was mentioned in 1872 and seems to have been built when Baneswell was developed in the 19th Century as the pub overlooks and runs parallel to the main line railway cutting.

A few Baneswell pubs have seen a bit of a boost recently as the area has attempted to reinvent itself to become Newports gay quarter. The former Great Western Railway Association Club reopened as a gay pub called “Through the Arch”, the former Paddy Palace O' Reilleys became “Ex-it” gay bar and the Oddfellowes And Foresters Arms has a rainbow outside and advertises itself as 'gay friendly', whatever that means? Oh and you can still get shafted in the Red Lion but don't expect the lazy landlord to open the pub until he gets up in the late afternoon after an alleged heavy night of partying throughout the early hours of the morning. 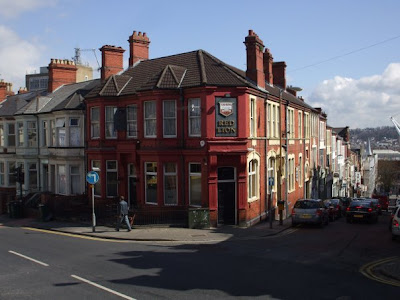 The Red Lion is another Punch Taverns pub and the present landlord seems intent on running his business into the ground. Punch seem to have little or no interest in seeing their pubs survive as they would rather get the money, even in a depressed housing market, that would result from the premises being sold off as accommodation. The only thing that will save this pub from certain closure would be a regime change, but unfortunately none seems likely.

Elsewhere in Newport, the Hornblower remains closed. This pub has now been closed for around 14 months and is owned by another failing pub company, Admiral Taverns. The Hornblower suffered in the last few years from a succession of bad managers, the last being 'Alchy' Karen who not only drank the place dry but allowed the pub to fall into a dreadful state with mould growing on the walls of the pub and filthy glassware. The 'Blower now stands empty, in the middle of 2 other derelict buildings, waiting for the inevitable insurance job fire to sweep through this run-down area of the City. Admiral Taverns are advertising for a tenant for the pub but with their high rents and beer tie, who would want to go into this business. Admiral Taverns have had an offer from a local brewery to buy the freehold of the Hornblower, but refuse to sell. In the crazy world of the Pubco, it makes more sense to hold onto a closed, derelict and soon to be collapsing building than to realise its capitol immediately. But at the end of the day the pub is still closed so it is the customer that looses.

Further down Commercial Street, the King William IV is also shut, though more securely boarded up, than other buildings. Perhaps the owners of this property are not waiting for the fire to rip through this place. This large building stands on the corner of 2 main roads, so Newport council may come out with a plan to demolish this pub to “assist with the traffic flow”. 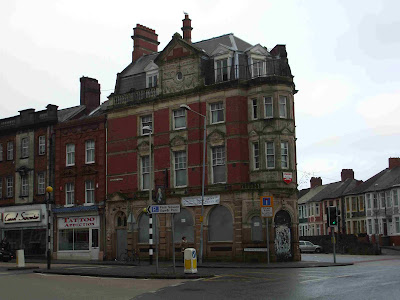 King William IV traffic obstruction
Heading down to Pill, the pub situation is even more dire. The saddest closure of them all is of the Church House, birthplace of Newport Tramp poet, WH Davies. Again, this pub is shut and boarded up, no sign on the outside of the building as to which Pubco owns it – it may be Punch as the Church House pub came from the former Hancocks/Welsh Brewers empire. 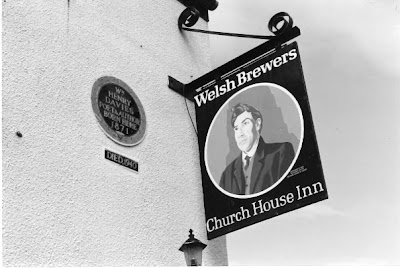 The Temperance Movements of the Nineteenth Century could only ever have dreamed of the pub carnage that has been caused by the Pubcos with their high rents and expensive beer ties. It has become clear that the tied-house system has failed with regard to the Pubcos – but will the Government ever realise this and bring in legislation that will open up the market to our smaller brewers? I seriously doubt it.

Just to let those who are interested know, Punch sold the Engineers Arms to Admiral Taverns in Apr 2007. They did this with a lot of their failing/low profit pubs, which Admiral then run into the ground.

They do this by promising the Landlord all the help he needs, (I know this because I worked in the Engineers for the last three years until it was closed down on the 07/01/2009), and then failing to deliver on a single promise. But as stated in the article, rent and beer prices are raised regularly.

From what I saw whilst working there, not £1 was invested in the Engineers Arms by Admiral Taverns.

No idea where Odd fellows is.. Is it the old Ritzy's

Sorry O8 I menat X-it. Oddfellows is a Victorian pub elsewhere in Baneswell.

The Engineers Arms has reopened. It has had a makeover and looks very nice inside and out. Good luck to the new landlady. HB available. Oh, and to avoid readers getting into trouble with the local 'characters' who infest the Red Lion, it is NOT a gay pub.