Now and Then, The Crown Inn, Raglan 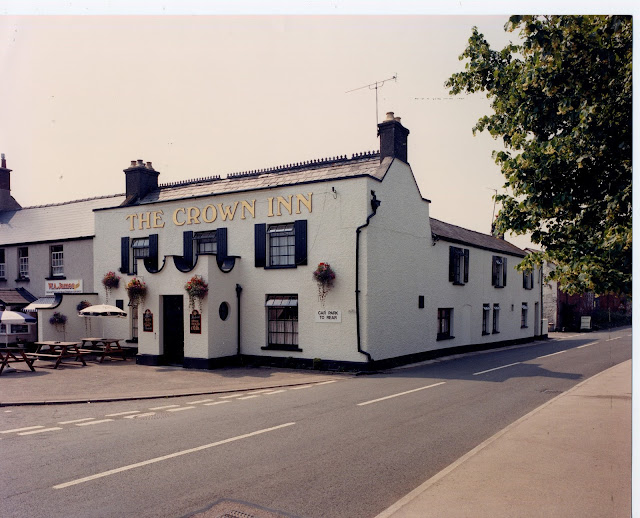 The Crown Inn, Raglan, Monmouthshire. This picture dates from the 1970s when this former Rhymney pub was owned by Whitbread.

For at least 180 years The Crown Inn has hosted clubs and events but none as exciting (and upsetting) as the 'Navies Riot of 1856'. The Navies were building the new Railway through Raglan. They didn't always get along with the locals. The fight started at the Crown Inn but engulfed the whole village before it was over.
Sergeant Beswick, Superintendent of Police in Raglan Division reported: about 7 o'clock last Saturday night I was sent for to the Crown inn, at Raglan, and I went there in company with railway police constable Clark; we found two men fighting in the passage. We separated the combatants a great number of navvies came into the street, and with fearful shouts commenced an attack upon us with stones' When the police interfered two of the navvies ran to the Ship inn, which was full of navvies; there came out from 40 to 45 navvies, who immediately commenced an attack upon the police. Beswick continues, 'I then sent for my cutlass, and the Irish retreated up the street; on their way up, they threw stones at every one whom they met, breaking a great number of windows and creating a great disturbance; assisted by a great number of constables, and by several of the inhabitants, we drove them out of the village. Fearing that lives would be lost, I desired the party to halt opposite the church'. The inhabitants of Raglan were in a state of great terror and excitement.'
Things weren't always this exciting at the Crown. The more common activities were meetings, dinners, and celebrations. Such a treat was the Raglan Club Feast for members of the Friendly Society that was headed by the Clytha and Llanarth band, playing lively airs to accompany them to church services followed by an 'excellent dinner' that lasted into the night.
During World War II, The Royal Veterinary Corps were stationed in the village at the Crown Hotel and Beaufort Hotel stables. Spencer, Graham (b.1934) (of Kings Head Inn) was often seen there talking about the injured horses.

A few years ago, the "N" of "Crown" had fallen off and the Brew Wales editor thought this pub was called the Crow!
The building to the left of the Crown was also a pub, the Kings Head Inn and lasted from 1820 until 1928, when it became a butchers shop which it still is today.