For those of you not heading down to Swansea Bay Beer & Cider Festival, first, why ever not? Its the second biggest beer and cider festival in Wales and the beer and cider list are online, added to that the grandeur of the Brangwyn Hall is well worth seeing. 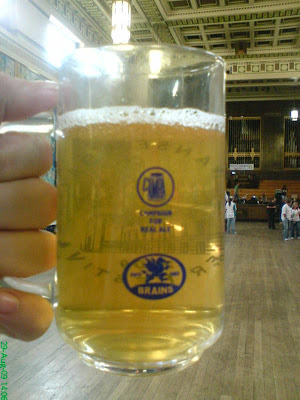 There are a few other festivals around South Wales this weekend:

First up, the Hollybush in Draethen near Machen is holding a festival starting today (Friday) at 5pm and continuing on until Sunday. More details on their Facebook event page here. The pub is situated between Newport and Machen and the Number 50 Newport-Caerphilly-Bargoed bus stops in Lower Machen, at the top of the lane to the hamlet.
The Hollybush

Next up in Cardiff

Artisan Brewery are back to holding their monthly open days at their brewery in Pontcanna.
ARTISAN BREWERY
183A KINGS RD
CARDIFF
CF119DF
According to Simon the brewer the following will be available:
*Bohemian Pilsner

(we'll also have our house blended vintage cider, wine and soft-drinks for the non-beer drinkers).

We'll have some hot food - for cold fingers.

Upping the anti on last months mysterious Jaffle Sadwitches, we're going back for some toasted focaccia/panini style hot grub - all gourmet - as we do, with vegetarians considered also.

Our new - non ‘BARE NAKED’ brand is out there. We're a tad behind on the website and other bits and bobs (bare with us). But, we're sure you'll recognise the beer and the new PIPES brand in and around Cardiff as being the same tasty - all natural pint you've been enjoying these past 4 years.

As usual our BAR OPEN event is FREE to all.

Further East in Tintern, Meadow Farm, the home of Kingstone Brewery will be playing host to live music from 1830 hrs with band Western Skyline.
Meadow Farm

And a bit of advanced notice if you fancy some beer and sausages on Wednesday 10th April in Cardiff, Gwdihw, that unusual little venue at the rear of Motorpoint Arena is holding a Beer & Sausage-Fest in association with the Bottle Shop from Roath. Should be an interesting evening!
Gwdihŵ Café Bar