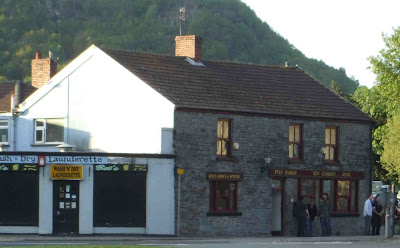 Open 12-11, 01443 403215
The Llanover Arms is a two-story building situated off the A470, opposite the entrance to Ynysangharad Park. One of the oldest buildings in the area, the Llanover Arms has been owned by the same family since 1899 and is one of the few unspoilt pubs in South Wales. The Llanover still retains a multi-room arrangement, with one long bar in the front room and serving hatches to the rear and side-rooms. In the bar there are old brewery mirrors, some of which are cracked but are still left on the walls of the pub as if changing anything in this Freehouse would be tantamount to vandalism. Reflections from names such as Ely, Bass and Worthington Breweries help to illuminate this bar and there are low-backed settles, reminiscent of church pews to sit on. One serving hatch even has an old sign advertising “Senior Service” cigarettes on it and old jugs together with pewter tankards hang from the ceiling of the bar.
Stepping into the Llanover Arms is like taking a step back into history and experiencing what nineteenth century pubs were like with their different rooms, all with different customers and atmospheres.
Four real ales are available nowadays, Brains Dark and Bitter, Felinfoel Double Dragon – an unusual beer for the area and a guest beer, usually from an independent brewery, often from many miles away, Thwaites Brewery of Lancashire was a recent visitor on the bar.
The old serving hatch for off-sales still exists on the side of the bar – a reminder of the days when children were not allowed into pubs but were sent to the window by the side of the bar to collect freshly-drawn beer in a jug. There is an old brass cash register on the bar, no longer used, but merely adding to the atmosphere of this Valleys boozer.
It is unusual that the pub is called the Llanover Arms, as Lady Llanover was a rampant teetotalist who closed down all the pubs on her estate near Abergavenny. Her husband was Benjamin Hall, who, when he was Minister for Works, gave his name to “Big Ben” in the Palace of Westminster. In one of the rooms there is a picture of  Lady Llanover and one of Lord Bute, but these are both racehorses and there is a belief in the pub that it is named after the racehorse and not the local landowners!
The Llanover Arms is an unusual survivor, in being a virtually unspoilt pub that has not been modernised into an open plan eatery or vertical drinking establishment, it is a pub that has hardly changed in a century, where the seats and tables bare witness to the countless customers and their pints that have used this pub throughout its life. A living piece of history and a good pint as well, what more does anyone want in a pub?