A few weeks before the country was in lockdown, two of us decided on doing the Transpennine Real Ale Trail, which is on the Manchester to Leeds service via Huddersfield. The pub at Manchester Piccadilly station isn't the best in the world so a quick Uber to the relatively new Brewdog Outpost Brewery on Oxford Road was called upon for lunch. Set in the heart of the University quarter, this bar was surprisingly quiet . 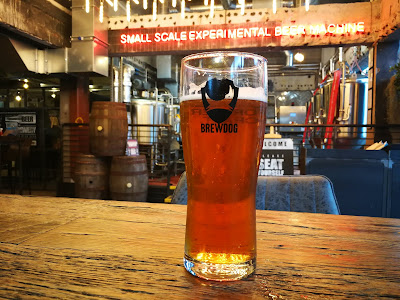 A short bus journey back to Piccadilly, saw us catch the Transpennine Express service to Huddersfield.  A fast, regular service with modern rolling stock, the service has both fast non-stopping trains and slower stopping services which run every hour and are ideal for the Ale Trail which we were going to do the next day. Having only visited Huddersfield once before it was a good excuse to spend the night there and discover some of the excellent bars around the town. On the way to the Magic Rock tap I came across a the unusually named pub, the Slubber's Arms. A slubber was someone who used a slubbing machine - In wool-spinning, a machine used for imparting a slight twist to rovings, to give them the needed strength for working them in the subsequent operations of drawing and spinning. 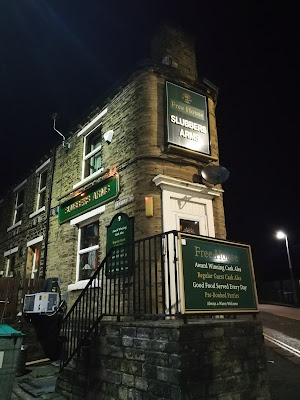 Well-worth visiting for a range of superb beers including a cask mild as well as Timothy Taylor beers. A former Wilson's pub, this was owned by Tim Taylor's and is now a freehouse. The interior has a 1950s feel to the place which, along with the coal fire adds to the ambience of the pub. 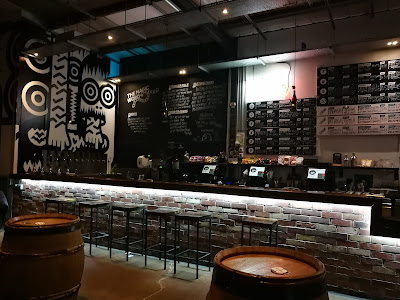 Another good pace to spend a few hours, however I was avoiding anything too strong as in the morning we were doing the Ale Trail. 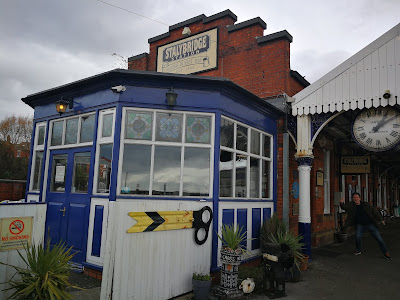 First pub of the day was Stalybridge Buffet Bar, situated just outside of Manchester and dating back to 1885, a fine selection of real ales on tap here and we could've spent longer here but the train was beckoning to:
Greenfield 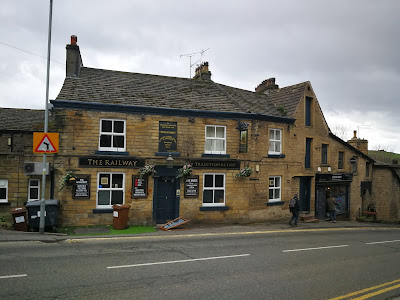 Unfortunately the Railway was closed at the time of visiting, early afternoon in the winter, so a steep walk downhill brought us past one of those lookalike Marston's eateries to the excellent Wellington 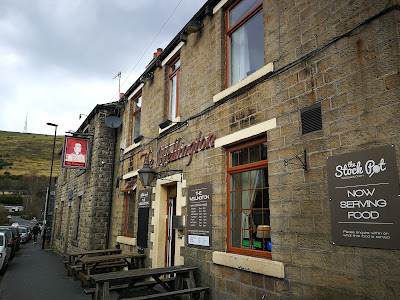 Seven real ales on tap, including a dark mild and Salopian Lemon Dream, could've spent longer in here but the train was calling, a steep walk uphill to return to the station and the next stop: 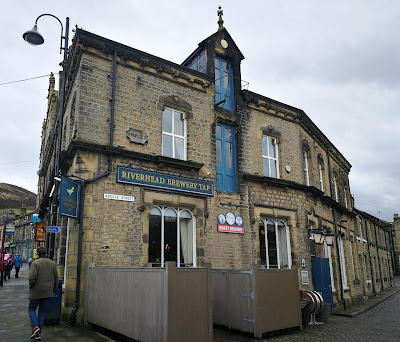 The Riverhead Brewery and Tap is one of four micro-breweries run by Ossett Brewery Again we could not fault the beer but too soon it was time to catch another hourly service travelling east through the Pennines.
Slaithwaite 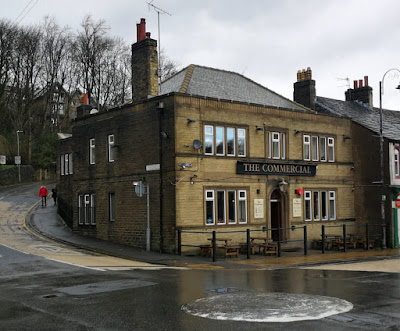 Slaithwaite is not pronounced how it is spelt, the locals say it fast and it comes out something like "Slewit or Sloughit" 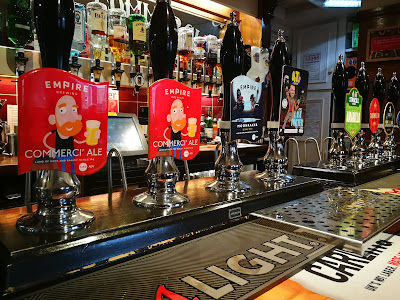 Another excellent range of real ales, including locally-brewed ones in the Commercial

The next stop on the line is Huddersfield, as we were using a Rail Rover ticket that does not allow travel between 1600 and 1800, we caught a train to the other end of the line at Batley and visited the Chaverspoons to have something to eat, meanwhile, I'll continue the crawl in the direction of travel. 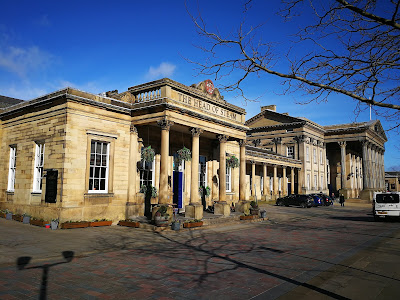 Huddersfield Railway Station has been praised by both Pevsner and Betjeman, although in their days there were not 2 pubs either side of the main station building, today the Head of Steam (above) and the King's Head (below) straddle the entrance to the grand building. 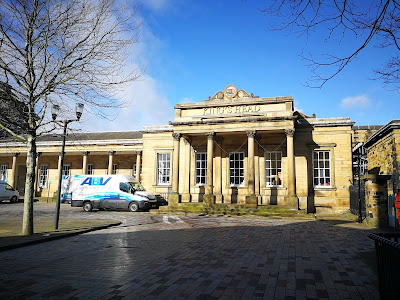 There was another licensed premises on St George's Square, the former George Hotel was the birthplace of Rugby League in 1895 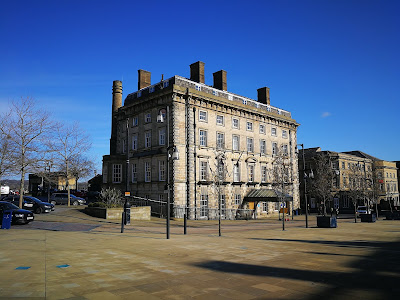 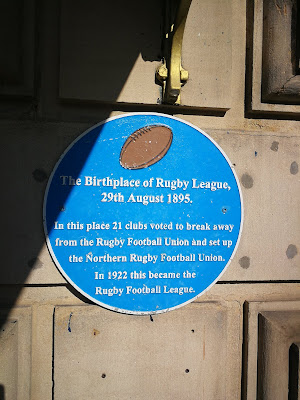 The former hotel closed in 2013 and after rejected planning applications by the owner for change of use to student flats, the local council have recently purchased the building.

Back to the trains and the next stop heading east on the Real Ale Trail is:
Mirfield 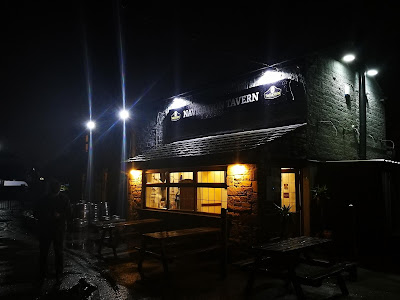 The Navigation, so named as a canal is close to the pub, has almost the entire draught range of Theakston's real ales on the bar, as well as two guest beers. 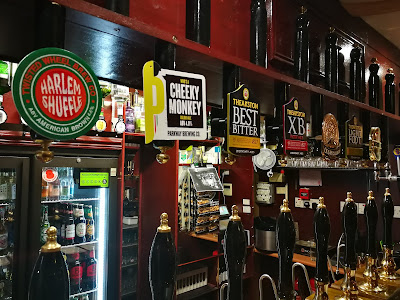 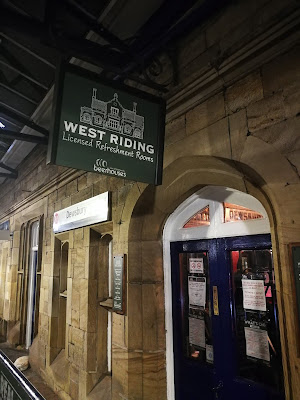 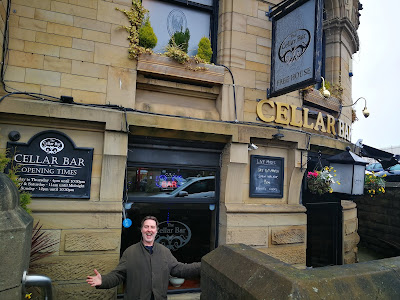 Opposite the station entrance is the Cellar Bar. Batley is an odd little place, there is even a Wetherspoons here, the Union Rooms, with odder customers than usual so it was a good time to put the app to use, saved mingling with the inmates. No photos of the 'Spoons as it was raining heavily and cold, by this time we were understanding why no one completes this Ale trail in the winter. 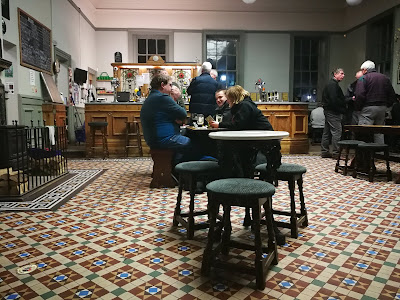 Back in the King's Head, Huddersfield for about 2230 at night! 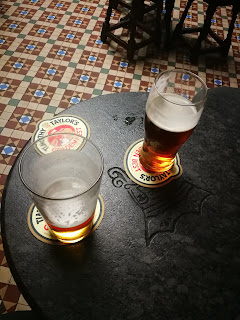 It was a hard day out!
The Transpennine Real Ale Trail has come in for some bad press over the years, partly to do with a lack of toilets on the more rural railway stations and, according to a local, an eagle-eyed pensioner with a camera who waits at her window overlooking one of the stations, ready to catch anyone having answering a call of nature. However, what it does offer are some fantastic pubs and fantastic beers. We spent 12 hours up and down the line using a not-that-well-advertised West Yorkshire Train Day Saver which only cost £8.10. We discovered some great pubs that are worth travelling out to visit just on their own, without the Ale Trail, I could have spent the afternoon in the Riverhead Brewery Tap for instance!