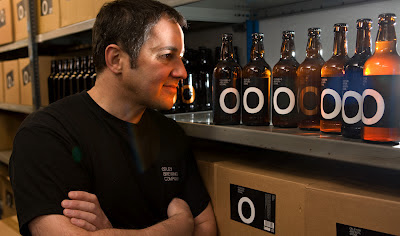 Leading south Wales microbrewery, Otley Brewing Company has announced the launch of its new brewery shop which will now be open six days a week.

Located at the brewery’s new 5,500 sq ft unit on the Albion Industrial Estate in Cilfynydd, the shop will stock the full range of Otley’s award winning bottle beers and the latest pressurised mini kegs which hold five litres of beer.

As well as stocking Otley beers the 180 sq ft shop will also house an extensive range of real ales from breweries across the UK and some of the world, making it the first point of call for real ale enthusiasts in south Wales.

The front of house shop is the final part of Otley’s new premises to be completed. The new location has allowed for the brewery to re-instate its in-house bottling facility which will process around 1,500 bottles a day as well as launch brewery tours and tasting sessions, allowing more people to learn about the processes involved in brewing some of the UK’s favourite craft ales.

Nick Otley, managing director of the Otley Brewing Company, said: “It is great to have the shop open and complete the offering that we have at the brewery. Visitors on our brewery tours can now purchase the beers they have sampled on site which we hope will enhance the experience for them.

“We hope that the brewery will now become an essential port of call for any beer and ale enthusiasts and will offer them something unique that they cannot find elsewhere. We’ve opened the doors just in time for Christmas for that those looking to stock up or to give as presents.”

Beer shoppers unable to make the journey to the brewery shop can also purchase Otley beers online at Real Beer Box and, as an added incentive over Christmas, Otley has announced the launch of its golden ticket competition.

Customers who have ordered an Otley Real Beer Box are being asked to look out for a golden ticket among their purchases. Lucky customers who receive a golden ticket are in with the chance of winning either one of six mini kegs, a six-month RealBeerBox subscription and a one-off chance to spend a day brewing at the brewing.
Nick continued: “Real Beer Box is a great way for people to sample our beers that maybe haven’t heard of us before. It makes us even more accessible to the market outside Wales and we hope that our golden ticket competition will not only inspire future beer enthusiasts, but also encourage customers to sample the different beers in our range.

“In particular we are looking forward to working alongside the winner of the brewday ticket and, you never know we might let them brew a beer of their own.”