Treherbert, the home of Welsh Vodka? 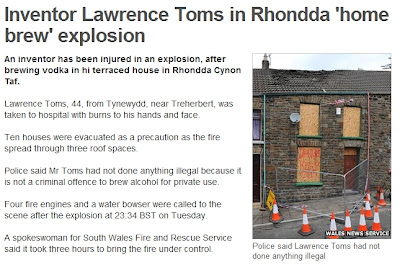 Well this story from the BBC has certainly put Treherbert on the map. Someone who invented paper from sheep shit has blown his house up attempting to distil alcohol.
Packed full of inaccurate reporting from the start, the hapless BBC reporter and Police spokesperson both seem a little confused as to what caused the explosion and the legalities involved.
NB - if the inventor was making vodka he was more than likely to be distilling alcohol, rather than just brewing it.
Brewing is relatively safe - the danger arises when you concentrate the alcohol by distillation - which is illegal, even if it is for personal consumption. The law is more concerned with avoidance of alcohol duty than the safety of distilling. And there is the problem which the BBC have overlooked - why was someone distilling alcohol in their home? Was it anything to do with the high rates of duty we have in the United Kingdom? Governments forcing up prices will not stop people from drinking, it will however drive them to underground methods such as using stills to get their fix. Something that the taxpayer-funded fake charity Alcohol Concern and their boss Dong Shaker fail to see in their calls to Government for more tax on alcohol.
Daily Mail have the story here  and the reporter is intelligent enough to know the difference between distilling and brewing.
Leg-iron also has his take on the story
The inventor should have stuck to making paper from sheep shit. Let's hope he wasn't making his vodka from the same stuff!