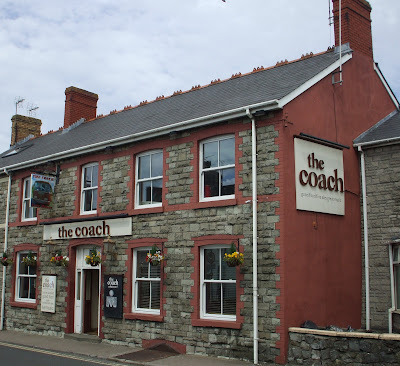 The Coach, 37 Cowbridge Road, Bridgend, CF31 3DH
Facebook site here
The Coach is a two-storey mid-to-late nineteenth century building situated on one of the main roads on the outskirts of Bridgend, only a short walk from the town centre. The building is faced with locally-quarried stone but is built out of brick and features colourful hanging baskets on the façade at this time of year. The Coach has an unique two-sided sign featuring the front and back of a Neath & Cardiff 'Brown Bomber' coach which used to travel past the pub. The pub was originally called the 'Coach & Horses' but the latter part of the name was dropped a number of years ago. 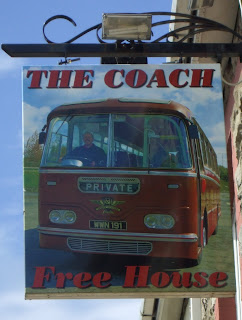 A central doorway leads to an open-plan wooden bar with three gleaming chrome handpumps, two of which are reserved for real ales from independent breweries and the third for cider from Wales' award-winning makers Gwynt-Y-Ddraig, with another cider or perry being served straight from the barrel. The full bottled range of Gwynt ciders are also available. Both above and behind the bar are pumpclips from some of dozens of brews this pub has served over the years since it was purchased in 2010 by two enterprising local customers. Beers from Breconshire, Skinners, Dark Star, Monty's and Vale of Glamorgan Breweries have all been served here, the Coach is a genuine freehouse with firm commitment to quality real ales. There is also a bottled beer range featuring brews such as Tomos Watkin Magic Lagyr as well as Goose Island IPA from the United States and other beers from Mexico and Estonia. A foreign draught 'guest' lager is also on tap, recent lagers have been Staropramen and Budweiser Budvar, both from the Czech Republic. 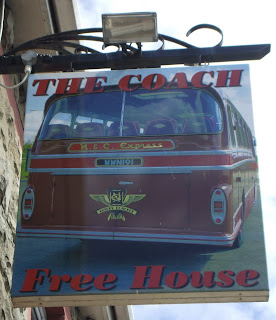 Despite being open-plan, the Coach manages to retain different areas; to the right of the bar is a pleasant lounge area with a stone fireplace, settles, tables and even a guitar and piano for music nights. The left-hand side features a dartboard, more seating and some contemporary art on the walls. To the rear of the Coach there is an outside section with a small patio area with tables and chairs.
A sell-out beer festival was held in the pub earlier this year and there are plans to hold another one in the future. Regular theme nights are held such as Jamaican or Cuban nights along with a quiz night on Tuesdays and this once neglected pub, purchased at auction by two relatively young locals has once again become the focus for the community.
Google Maps:
View Larger Map