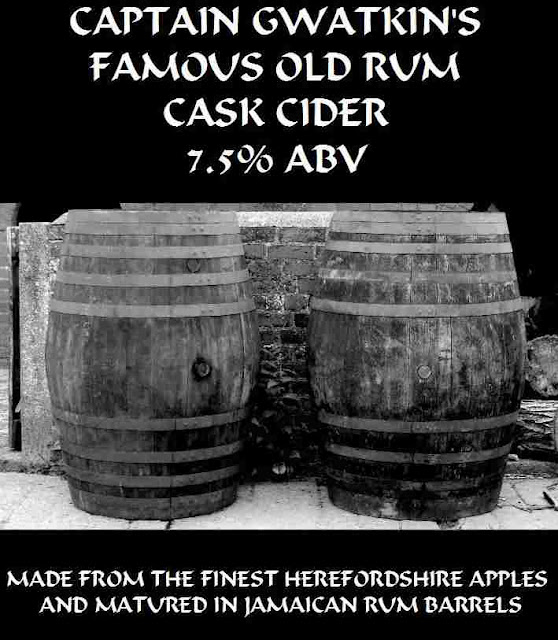 Captain Gwatkin's Famous Old Rum Cask Cider today won the Bronze Award in the UK National Champion Cider of Britain Competition, run by CAMRA, the Campaign for Real Ale. The annual award, held at Reading Beer & Cider Festival, features ciders and perries from across Britain which are judged in blind tastings to find the winner.
This Herefordshire Cider, made by Denis Gwatkin at his family farm in Abbeydore, is matured in Jamaican Rum Barrels and is only available o draught at the farm and a few select outlets as only a limited amount is made every year due to the difficulty in sourcing good quality rum barrels.

The other winners were:
Cider


So who was Captain Gwatkin then?
Captain Gwatkin, who in 1722 challenged the 'pyrates' who attacked his ship, the Amy, as it sailed from Carolina to England. He and his crew killed about 30 pirates and forced the pirate sloop ashore, then attempted prevent the pirates from attacking other ships by sailing to land to burn the sloop. Unfortunately, a shot from the shore killed him. His rather pragmatic crew decided it would be sensible to carry on sailing to England rather than pursue the pirates further! (Information in several newspapers from 1722, including the London-based Post Boy)
Gwatkin Cider
Moorhampton Park Farm
Abbeydore
Herefordshire
HR2 0AL