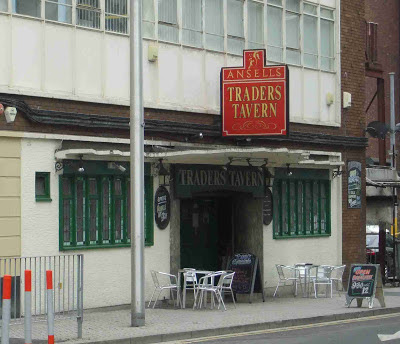 The Traders Tavern stands on the ground floor of one side of an office block built around 1971 and was originally named the Panarama, although the view of the pub today is somewhat obscured by the building of the new Admiral headquarters opposite. Before the pub was built, David Street consisted of nineteenth-century terraced houses until they were demolished in the 1960s. The current building is also under threat of redevelopment so the future of the Traders Tavern is uncertain. The name of the pub is a reminder that not too long ago there was a open-air market nearby. 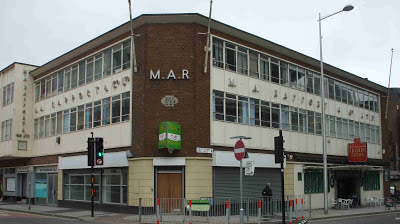 The outside of the Traders Tavern features the squirrel logo of the former Birmingham-based brewery Ansells who used to run the pub, before they sold off their pubs to pub companies. The red and gold sign on the outside contrasts with the green window frames.

The entrance is centrally-place but set-back from the pavement, a semi-circular window features doors either side of it with both doors leading into the single-roomed pub. Once on the inside of the pub the stained-glass windows become apparent where the word Traders is spelt out in red lettering with green glass borders.

The bar is situated on the left-hand side of the pub and is made out of dark wood with gleaming chrome handpumps and fonts mounted on it. Two real ales are served, Brains Bitter and Rhymney Bitter, although these may change for other Rhymney, Brains or even Tomos Watkin beers.

The interior of the Traders Tavern is somewhat dated, although some might revel in the nostalgia of old posters of bands such as Duran Duran and Erasure who played at the nearby Cardiff International Arena, now the Motorpoint Arena. Elsewhere in the pub there are a few small alcoves for discreet conversations, otherwise the pub is open-plan. Unusually the pub ceiling features circular features in it and the name of the pub is spelt in large letters, useful in case customers forget where they are. There are flat-screen televisions around the pub. The Traders Tavern may be small but it's a popular City-Centre pub with a dedicated regular clientèle.

Food is served all day from a traditional pub menu with breakfast served from 0930. There are also chalkboards offering specials such as maple marinated pork steaks, with a special 2 for £9.99 offer.