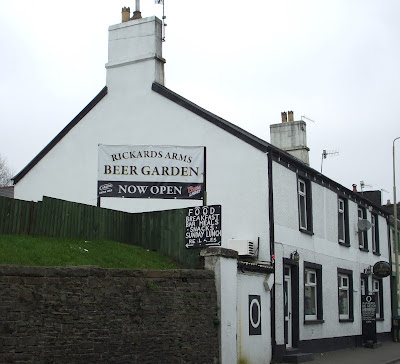 There is no pub sign on the Rickards Arms but the black and white painted exterior and the 'O' symbols on the doors point to this pub being the third pub run by the award-winning Otley family who also run the nearby Otley Arms and the Bunch of Grapes in Pontypridd. Situated on a main road, the Rickards dates back some 200 years, although it was rebuilt in the latter part of the nineteenth century. From the 1920s until 1998 the pub was owned and run by the Thomas family before the Otley family bought it in 1998. The pub was named the Rickards after a landowning family from Llantrisant. The pub is a short distance from Treforest railway station and there are bus stops nearby.

The front door with the large Otley 'O' on it leads into a pleasant bar area with a large wooden bar that features intricate carvings. Three gleaming brass handpumps are mounted on the bar with Otley O1 being the permanent beer and two guest beers that change frequently on the other two handpumps. Recent guest beers have included Bateman's Hooker, Worthington Red Shield and Sharp's Doombar. Bottled Otley beers are also available along with bottled Gwynt Y Ddraig cider.

To the right-hand-side of the bar is an unusual stone-walled room with an arched brick roof and niches for candles. This appears to be the oldest part of the pub and was originally a cellar, today it houses the pool table and the big-screen used for major sporting events.

A flagstone-floored stairwell to the side of this cellar leads up to the restaurant/function room with its wood-burning stove and also leads to the surprisingly large beer garden and smoking shelter. The outside area is almost the size of the interior of the pub downstairs and in the summer acts as a sun-trap.

To the left of the bar is another room, entered via a small passageway, this was originally another house that the Rickards Arms expanded into. Unusually there is a painting on the wall of the famous bridge at Pontypridd, this is signed by a certain F. Harris who had a more famous grandson who is also a painter and is named Rolf! Today this room is used as a dining area. 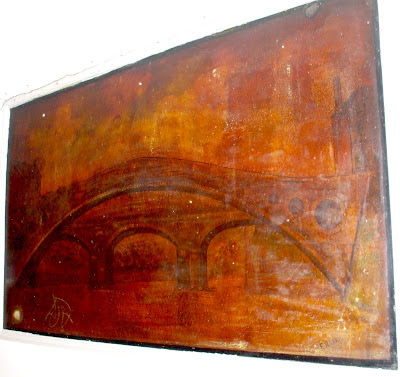 Above: the tobacco-stained painting of Ponty's bridge

Food is served all day and the Rickards Arms opens at 9am for the breakfast menu which is served until 3pm so the students living nearby do not have to get up too early. The day-time and evening menu features the same hand-cut chips as the in the other Otley pubs and a full range of grills and burgers feature on the printed menu, together with daily chalkboard specials.
Free WiFi is also available.

Transport:
The Rickards is easily reached by train as the station is near to the pub