I was recently given a copy of the film 'The Rhymney Story” (thanks Dave!) which gives a fascinating glimpse into a brewery in the 1960s. Although the film is undated it contains footage of the opening of the new brewery offices by Lord Robens, Chair of the National Coal Board, at the Crosswells Brewery site in Ely, Cardiff, in February 1963. The coal-fired boilers burnt 40 tons of a coal a week so there was a vested interest by the NCB. 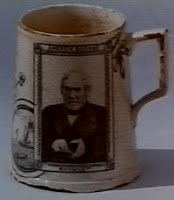 The film begins with a few scenic shots of Rhymney and of course mentions the importance of the ironworks to the locality. The brewery owes its origins to the Rhymney Iron Company who established it in 1838 with Andrew Buchan (pictured on a commemorative mug) as manager, to slake the thirst of those who worked in the iron industry.
By 1867 it was considered the largest brewery in South Wales. The ironworks closed in 1890 and since then the company focused on coal mining until it was purchased by the Powell Duffryn Steam Coal Company Ltd in 1920. In 1929 the brewery became a separate company in its own right when it merged with Griffiths Brothers Brewery of Blaina under the title of Andrew Buchan's Brewery, the name of the legendary figure who first managed the brewery. 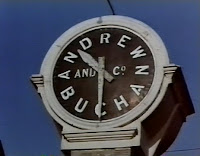 The famous brewery clock is shown, which once stood at the gates of the brewery and has now been moved to the rear of a building close to Rhymney train station.
In 1936 Rhymney Brewery purchased Crosswells Brewery of Ely, Cardiff. By the time this film was made these were the only two breweries left operating in the Rhymney Brewery empire after a series of takeovers and closures. The film does shift from one brewery to another without making it clear which site is which but from what I have deduced from other sources is that the bottling plant was at the Crosswells site and the majority of draught beers brewed at the Rhymney site.
There is a good little piece about brewing the beer with some facts that you just don't normally see in the history books such as the malt came from the Dereham Maltings in Norfolk and sugar was used in the brew. 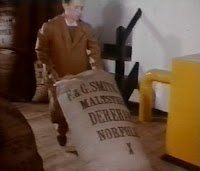 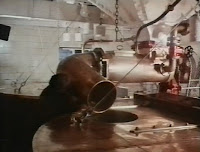 Above: Two copper mashtuns fed via a copper pipe from the hopper overhead
Below: the copper was painted white, in 1960 according to the beam 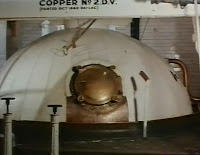 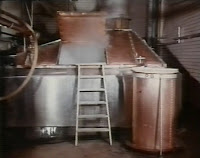 Above: the hop back
The gleaming copper vessels makes a change from the stainless steel vessels we are familiar with today in breweries. In fact the copper was also made from copper as was the hopback and some of the older fermenting vessels. The Rhymney brewery underwent a refurbishment in the 1950s and closed stainless steel fermenters can be seen in one shot. 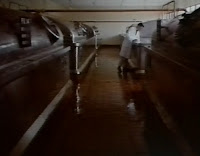 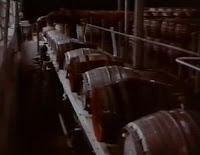 The film also shows the cask washing and at this time the  brewery was using a mixture of wooden and metal barrels. Although this shot of the cask racking room only shows wooden casks. 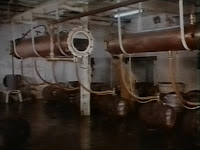 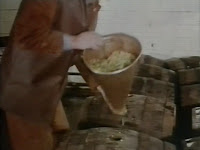 I was a bit surprised that some beers were dry hopped – the process of putting hops in the barrel with the beer to impart more flavour – its not something normally associated with Welsh beers and goes against the image of Welsh beers traditionally being bland.

After being racked into barrels the beers are stored in a cool room, only being given a dose of finings immediately before they leave the brewery. It is not mentioned how long the beers are stored here for but there are quite a few barrels being stored in this room.
The pubs get a mention, although with a huge estate of over 730 pubs only a few get a mention, the Salutation in Weobly, the Hollybush in Hay, the Angel in Pontneddfechan and the famous Old House at Llangynydd. The unique Railway in Pontlottyn, now sadly demolished, is shown. This pub was built under the arches of a railway viaduct, as this land was owned by the Rhymney Railway Company and not by the temperance loving landowner of the rest of the village who would not allow pubs in the area.

Above: the Railway Inn, Pomtlottyn
Footage of tanked beer on the drays is also shot – in 1963 Rhymney Brewery equipped sixty pubs with this facility where the beer was fed from the tanker and into the cellar tank, where it was kept under gas and pumped up to the keg fonts on the bar. 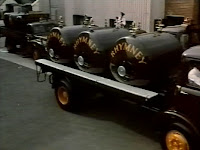 The former Iron Company shop which ran out the notorious 'truck' system is seen converted into a mineral water factory, still using the crates of the Llanfoist name, taken from the former Charles Edwards Brewery of Llanfoist, Abergavenny which was taken over in 1945. 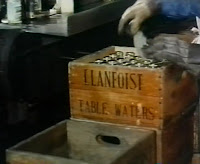 As well as soft drinks, the brewery also bottled wines and spirits. The massive wooden butts that transported and stored the wine can be seen in the background of this image below. 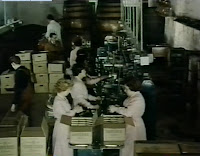 There the film leaves Rhymney and footage of Crosswells Brewery at Ely is shot showing the bottling process. “Return your empties please” says the narrator to this story. How many breweries now have the facilities for washing and reusing bottles? Even beer crates are a rarity today with most bottled beers going out shrink-wrapped to a cardboard tray.
The scale of the bottling line can be seen in the pasteurising plant below: 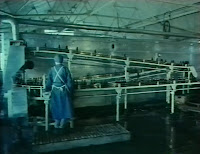 Rhymney took over Crosswells neighbouring brewery Ely in 1959 and demolished it in 1963, concentrating production on the Crosswells site and virtually building a new brewery and a administration block.

Above and below: Crosswells Brewery, Ely, Cardiff

Looking at this film there is only a small amount of branding in it, compared to how a brewery would project itself nowadays. The famous Hobby Horse trademark gets a mention and can be seen throughout the film but apart from the 'Welsh Brown' sign and 2 indistinct pumpclips there is very little. 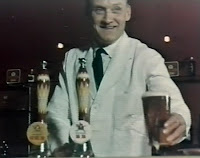 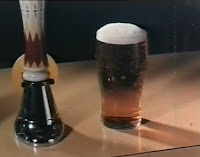 The flavour of the beer does not get a mention at all, something I think all of us would be interested in nowadays! A brief shot of the keg beer 'Silver Drum' is shown, though the name is not, perhaps because it was one of Ely Brewery's most famous products, not Rhymney or Crosswells. 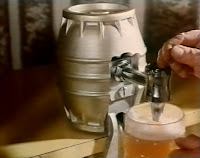 This film is a brief snapshot of what was at the time the largest brewery in Wales. At the time this film was made Whitbread Brewery owned 30% of Rhymney Brewery, it was said that Rhymney was one of the breweries that 'sheltered under the Whitbread Umbrella'. A few years later in 1966 Whitbread made a £4.2 million takeover of Rhymney Brewery and replaced the Rhymney beers with their Tankard and Trophy beers. Rhymney Brewery was closed and demolished in 1978, the Cardiff brewery followed in 1982.
Film: 'The Rhymney Brewery'
Year: 1963 or thereabouts
Length: 24 minutes
Director: Ken Pople
Production: Stanley Jones-Frank
There is of course a Rhymney Brewery today, brewing in Merthyr Tydfil though shortly to move to Blaenavon, so once again the Hobby Horse roams the South Wales valleys.