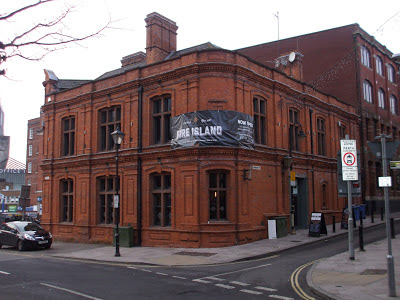 After weeks of speculation, it has been confirmed that the CAMRA Champion Brewers of Wales, Tiny Rebel, are to takeover Fire Island in Cardiff. Older CAMRA members will remember the venue as the former Glamorgan Councils Staff Club, immortalised on camera by Maciej's photographs here.

A bit of history regarding the site:
There is a building on this site on Speed's map of 1610 when it was next to the river and by the nineteenth century the town slaughterhouse was on this site. In the latter part of the nineteenth century the cattle market that was sited opposite, where the multi-storey car park is today, moved to Canton and the slaughterhouse was demolished with the building we see today replacing it. Originally this building was the house of the town and later in 1905 city treasurer and the small barred windows on the Womanby Street side once held the strongroom.

There are also plans to rename the pub, with names such as the Slaughterhouse not being considered!
Good luck to Tiny Rebel with this venture, this part of Cardiff is fast becoming the craft beer quarter with the City Arms opposite and Zero Degrees just around the corner.

After a year of local tasting panels and regional heats leading up to the finals, CAMRA, the Campaign for Real Ale, is today proud to announce that Elland 1872 Porter has been crowned the 'Best Beer' in Britain at the Great British Beer Festival, Olympia, London.
The West Yorkshire brewed real ale was judged the Supreme Champion over a host of other
finalists in 7 different beer categories (Bitters,
Best Bitters, Strong Bitters, Golden Ales, Milds,
Winter Beers, and the Speciality class), including
beers from both small microbrewers and large
regional brewers.
Colin Valentine, Chair of the competition and
CAMRA Chairman, spoke in praise of today's
winner. He said:
“It was a really tough decision but Elland 1872 Porter is a fantastic beer and a well deserved winner. A 6.5% abv, rich and strongly flavoured porter with flavours of coffee and dark chocolate, this result makes it two years in a row that our Champion Winter Beer has gone on to win the Champion Beer of Britain competition.”

Michael Wynnyczuk, Head Brewer at Elland, had
this to say,
“I’m utterly shocked. It’s a great beer but after we won the Winter Ales competition you wonder about it in the summer GBBF competition, as people may prefer different styles of beer in warmer weather. But we know it’s a great beer and we’re really proud to be crowned Champion
Beer of Britain.”
This year's Silver went to Buntingford (Hertfordshire) Twitchell, whilst the Bronze award went Fyne Ales (Argyll) Jarl.
Elland 1872 Porter is available at the Great British Beer Festival this week.

Real ales from breweries in Wales will be gracing the bar at the CAMRA,  Campaign for Real Ale, flagship Great British Beer Festival this week.

The week-long event is taking place at London’s Olympia from Tuesday the 13th to
Saturday the 17 th of August and is expected to attract over 55,000 visitors, who’ll get to
sample over 800 beers from around the UK, international brews from Belgium, Germany,
Italy, and the USA, as well as traditional ciders and perries.

“There really has never been a better time to discover real ale, with over a thousand breweries in the UK producing over 5000
different beers. In fact the choice is so great that this year we have taken the decision to
feature just a single beer from most breweries, in order to represent the largest number of
breweries as possible from across the UK", said Mike Benner, CAMRA Chief Executive.
Whether it’s weird and wonderful beers like “A-
Pork-A-Lypse”, a Double Chocolate and Bacon
Porter produced by Brain’s Brewery in Wales,
or St Peter’s Brewery of Suffolk’s “Grapefruit
Wheat Beer” - or more established styles such
as “Dissolution IPA”, brewed by West Yorkshire’s Kirkstall brewery, or Fuller’s of
London’s classic “ESB” – the festival promises to have something for everyone.

The following beers from Wales will feature:

There is also the Champion Beer of Britain competition occuring, however the list of those beers is not being released, so it's safe to assume none of the above beers are in it!

First up, the Lion in Trellech, Monmouthshire are holding their fifth annual Cider & Perry Festival.
Secondly, the Bunch of Grapes in Pontypridd also have a Cider & Pasty Festival on this weekend.
This will feature a selection of homemade, local real ciders and perry available on
draught and in bottles.
All of this will be washed down with a selection of homemade pies and pasties
made especially for the weekend!

THE CIDERMAKERS:
There will be 10 ciders at any one time available from the following producers from
Hereford and South Wales.
Ross on Wye, Carey Organics, Border Orchards, Swallowfields, Hewitts, Upper House Farm, Raglan Cider Mill, and more
locally, from Blindgranny in Caerphilly
and Gwynt-yr-Ddraig in Llantwit Fadre.

Lastly, the Star Talybont-on-Usk in Powys will be playing host to the Brecon Jazz Festival Fringe with music and beer.

Now and Then - Gwatkin Cider Farm 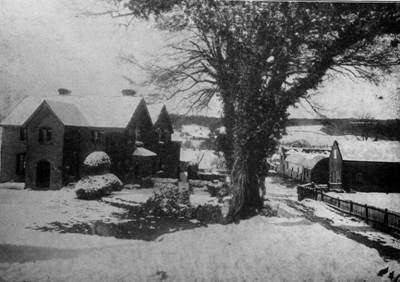 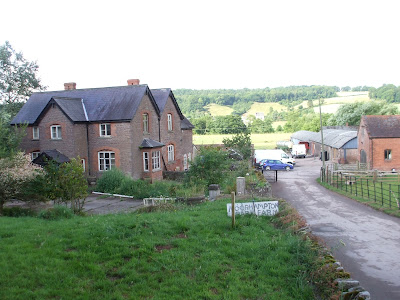 The top photo shows Moorhampton Farm, Abbey Dore, Herefordshire as it was in 1919 and the modern photo is how the home of Gwatkin Cider is today, now known as Moorhampton Park Farm.