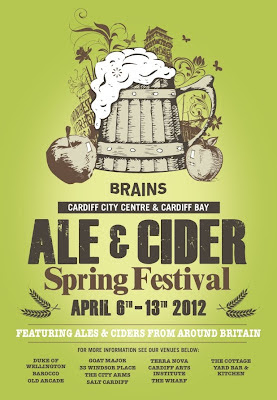 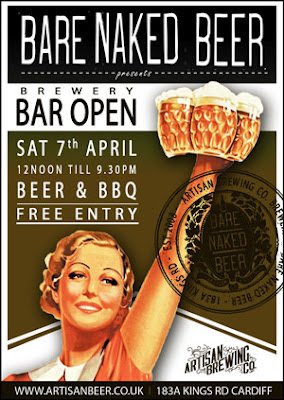 Elsewhere in Cardiff, the Artisan Brewery will be holding their first open day of the year at their brewery on Saturday 7th..
Helles Lager, ALTbeer, Bavarian Wheat, Chocolate Wheat, will be available as well as wine, cider and softdrinks for the non-beer drinking sorts.
Food from the barbie as well withbBurgers, jerk chicken and a veg option too.
The brewery will be hosting its open days each first Saturday of the month for the remainder of the year.
Entry is Free! Bar Serves from 12noon till 9.30pm.

There are rumours of another beer festival in Cardiff but the pub holding it smells of fish and the high-gravity produced beers are not as good quality as beers from other Welsh brewers. Still if the owners of this establishment can't be bothered to tell me about this event then it won't get a mention here!

Heading West, the Coach in Bridgend is also holding a beer festival, and the beer list and pub details are available here.


Further North, the Bell, Glangrwyney, Crickhowell, NP8 1EH , is also holding a festival from Friday 6th to Monday the 9th April, with Live music on Saturday and Sunday ( afternoon and evening)