From the British Beer & Pub Association

Britain’s pubs have seen a six per cent fall in beer sales in the first quarter of 2012, as they bore the brunt of continued, huge rises in the tax on beer, according to the latest quarterly ‘Beer Barometer’ from the British Beer & Pub Association (BBPA), issued today. In contrast, off trade sales were up by nearly five per cent.

The BBPA believes that current pressures on the beer and pub sector, on which almost one million jobs depend, further highlight the poor decision of the Government to raise Beer Tax by a further five per cent in the March Budget – making for an astonishing 42 per cent tax hike since March 2008.

There is some comfort in the figures, in that beer sales are now falling at a slower rate than in the previous four years. Overall beer sales fell by 1.4 per cent in the quarter compared to last year. In the year to March 2012, overall beer sales were down 2.9 per cent, following the 7 per cent rise in beer duty last March.

The recent Budget tax hike was made under the controversial ‘duty escalator’ policy, despite widespread calls to rein in the rises. The BBPA and Oxford Economics believe this decision will cost some 5,000 jobs in 2012/13. A Government e-petition demanding an end to these punitive tax rises has already attracted over 28,000 signatures.

“These figures show the Chancellor was totally wrong to raise beer tax again in his Budget, as this discredited policy continues to hit pubs hard. This key British industry could be an engine of growth for the economy – but poor tax policy is damaging our potential. The public are getting behind calls for a change in policy, and signing the e-petition in their thousands. I hope people will continue to respond positively and back a tax freeze – and I hope the Government will listen.” 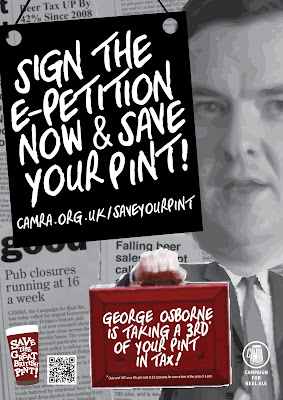