It was the Big Apple Cider and Perry Championships in Putley, Herefordshire, yesterday and the results are below 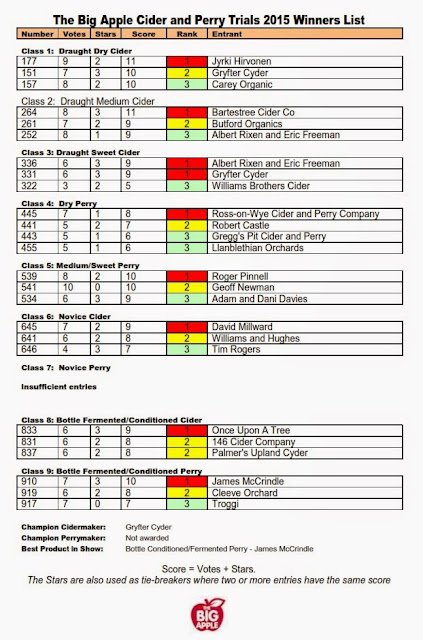 CAMRA Cider and Perry of the Year

CAMRA, the Campaign for Real Ale, has today announced the winners of its National Cider and Perry Championships.

The joint winners of the Cider Gold medal are White Jersey by Orgasmic and Janet’s Jungle Juice by West Croft. White Jersey was described by judges as being ‘fruity’ and ‘easy drinking’, with ‘a slight sweetness balanced by an excellent tang’, and having ‘balance without too much acidity’. Janet’s Jungle Juice was described as having a ‘mature and woody aroma’ with ‘an initial sweetness and a smooth finish’, and a ‘full mouthfeel with a resinous aroma’.

The winner of the Perry Gold medal is Two Trees Perry by Gwynt y Ddraig (meaning ‘dragon’s breath’ in Welsh) which the judges described as being ‘initially sweet with a refreshing, dry aftertaste’, ‘complex yet well balanced with a poached pear flavour and aroma’ with a ‘slowly developing finish’.

The final round of judging for CAMRA’s National Cider and Perry Championships 2015 took place at the popular Reading Beer and Cider festival today. The competition featured ciders and perries from across the UK, with each cider and perry judged on its individual taste, aroma, flavour, after-taste and overall appeal. The top awards were selected by a specially chosen panel of experienced judges, drinks writers and CAMRA members.

Steve Layton of Orgasmic Cider Company, had this to say on hearing his cider had taken the top spot,

“We’re very proud of this single blend [variety] cider - we grow the apples, we produce the cider, we do everything - so to me this is a great achievement, as it lets me know our cider is enjoyable to drink by everybody on this top judging panel. We're very proud to win and this is a massive achievement.

Andrea Briers, CAMRA National Cider and Perry Committee Chairman, had this to say on the quality and diversity of entries:

“The quality and variety of real cider and perry is increasing year-on-year, making our job as judges increasingly difficult. With a set of truly excellent drinks available this year at the festival, and a competition which was very tight right until the final judging we are confident these ciders and perries can truly be known as the best in Britain.”

Reading CAMRA Beer and Cider Festival serves over 550 beers available, plus 150 ciders and perries (from over 100 producers), plus a selection of foreign beers, English wines and mead.