The truth about binge drinking 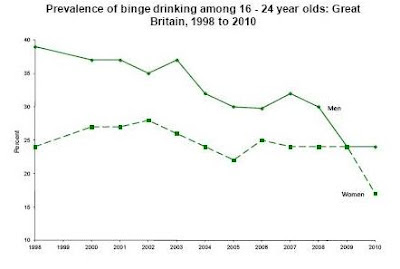 Alcohol sales are in decline, but still our politicians and their publicly-funded fake charities churn out their same old lies about binge drink epidemics that get turned into headlines in the Daily Mail by lazy hacks who can't be bothered to look at the evidence. So thanks to Straight Statistics for the above graph which shows a decline in binge drinking. Where, might you ask does such a graph originate from? The House of Commons library where it forms part of a larger study available as a pdf here.