Cock and Bull in Stony Stratford 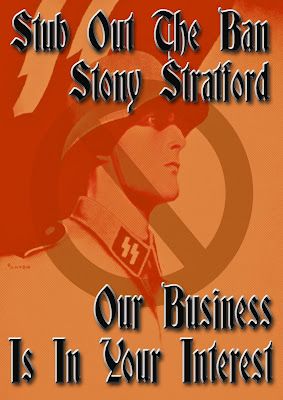 According to Wikipedia a 'Cock and Bull Story' is
and is believed to have originated from stage coachcoaching inns, travellers' gossip and rumour exchanged between two The Cock and The Bull in Stony Stratford, England. These inns were a main stopping point on the turnpike road from London to Birmingham , Chester and North Wales (for Ireland).

Stony Stratford is sited on the Old Watling Street, now the High Street and this road contains some fantastic old coaching inns which I once spent an afternoon researching some years ago.

However one Stony Stratford Councillor, Paul Bartlett, has decided to take it on himself to introduce a smoking ban in public places.

"Stony Stratford is a historic town which is blighted by cigarette butts," said Herr Bartlett.
"The plan that I am trying to put forward is for smoking to be banned in public in the High Street, surrounding streets, and preferably elsewhere as well."
"Why should people be able to smoke in my face and spoil the environment?," he added.

Yes that is correct, this health Nazi has invented his own Cock and Bull Story by wanting to ban smoking in public, not content with thousands of pubs being closed in this countrythis idiot is now proposing to ban a perfectly legal pastime form the streets of his town, though it is more of a surburb of Milton Keynes now.

Where to start with this authoritarian idiot? Well over at Dick's Place place a protest has been organised for this Saturday at the Vaults Bar, High Street, Stony Stratford, Buckinghamshire, MK11 1AQ.
There is a Facebook Group
A number of articles have been written about this:
Pro-street smoking rally in Stony Stratford - Joshua Lachkovic
For once I'm missing England - Angry Exile
On manoeuvres in Stony Stratford - Misanthrope Girl
A day in Stony Stratford - Devil's Kitchen
Is there honour amongst thieves? - Frank Davis
Stony Stratford, the sequel - Filthy Engineer
... and there are a collection of posters at Lawson Narse's place.


The speakers so far confirmed are as below (others may follow):
Bill Etheridge - Midlands representative for The Freedom Association
David O'Dell - Head of Stony Stratford Chamber of Commerce
Patrick Hayes - Journalist at the Institute of Ideas and columnist at Spiked
Nigel Farage - Leader of UKIP

So if you fancy satnding up for civil rights this Saturday in Stony Stratford, pop along and give the smokers your support.
First they came for the Smokers, next they came for the drinkers. The health Nazis are out there - time to start hitting back now!