It was enjoying seeing the Saturday Kitchen hashtag (#Saturdaykitchen) Twitterjacked by beer lovers today. I must admit I gave up watching the show years ago after Anthony Worrall-Thompson stopped presenting it - I prefer to spend my Saturday mornings watching repeats of Time Team on More4 than watching some unfunny comedian and theatrical has-beans waffle on about their likes and dislikes when it comes to food.
The big problem it seems on Saturday Kitchen is that the presenters are always suggesting wines to go with the food - even today suggesting wine with curry! Now all beer lovers know that hoppy ales, IPAs, even King Cobra are far better to match with a curry than wine - but the presenters and most probably the producers of the show still promote the grape over the grain.
Today beer drinkers took over the #Saturdaykitchen and suggested their own beer matches to the food being prepared. 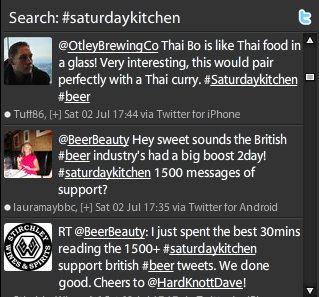 Above: Some of the Tweets today
Check out this blog post from Hardnott Dave
He has also made a complaint to OfCom, the basis of which is below:

Beer is the national indigenous drink of Great Britain
Beer is deliberately omitted from Saturday Kitchen
Wine is almost completely an imported product
Beer can be matched with food very successfully
By omitting beer in favour of wine, the BBC is deliberately and unreasonably biasing its content to a foreign import
The BBC, our national broadcasting authority, which is paid for by a tax on television ownership, is deliberately and recklessly damaging the UK economy by its unreasonable and deliberate rejection of beer as a beverage to drink with food. The vast majority of beer consumed in the UK is brewed in the UK using British grown ingredients
Drinking alcohol when eating is a much more responsible activity than heavy drinking sessions when no food is consumed. The BBC, in omitting beer from one of its prime time food programs is alienating beer drinkers from the healthy activity of moderate drinking whilst eating; therefore the BBC is being reckless with the nations health
With many eating and family pubs it is disingenuous to suggest that beer does not form part of the British dining culture
Promoting brands of wine in named supermarkets without also giving air time to quality British beer brands is unacceptable bias for a public funded organisation
Beer is an inclusive beverage. Choosing wine in favour of beer is divisive and deliberately seeks to engage with a much narrower section of society than is acceptable in todays cosmopolitan and liberal Britain.
Over  1500 comments were made on Twitter this morning using the hashtag Saturday Kitchen and suggesting beers to go with the food being prepared on the show. 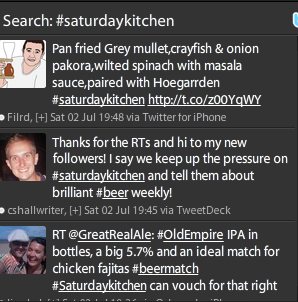 A good start to a campaign to get the BBC to put more beer on our screens.
The Brewing Shed has their take on it here.