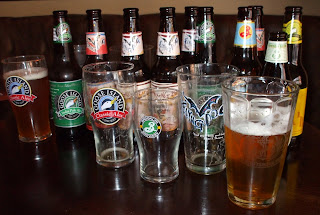 Well done to SA Brain for allowing the City Arms in Cardiff to host an American Beer Festival. The first order of beers had sold out in a few days but reorders were done and the full range was replenished within a few days. Most of the beers were served in brewery branded glasses – a nice touch that added to the festival. With 2 beers on draught and the rest in bottles a good and unusual selection of beers was put on. The festival also gave me a chance to put the beers on Untappd – a social networking site for beer drinkers – with a lot of American beers on it.

I started with a bottle of Goose Island IPA from Chicago – a beer recommended to me by Glynn from the Rake last year. An excellent IPA to start the day off, packed with citrus and hop notes. Very enjoyable, I could have gone for some more of this but in the interests of research I decided to try a few more beers. Probably the best beer brewed by Inbev or whatever they are calling themselves this week - AnInBev, AnBev? 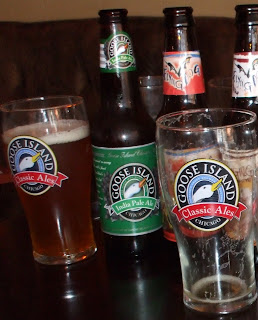 One of my drinking companions had chosen to go for a beer from Flying Dog Brewery of Maryland and the bottle label intrigued me – it featured the unmistakable artwork of Ralph Steadman on it, so I ordered their Raging Bitch – a Belgium IPA, weighing in at a hefty 8.3% ABV. The glass it came in was decorated with the company logo and featured a quote from Hunter S Thompson on it, “Good people drink good beer”. Can't argue with that! And the beer – a hop bomb on the tongue, dangerously drinkable at this strength, straight away I realised this was to become one of my favourite beers. Could have stayed drinking this all night but thought I'd better go for something a bit weaker next.

Onto the Brooklyn Summer Beer – a bit weaker than the others at 5% - one drinking companion thought it was a bit bland but I thought it was a quite a pleasant and refreshing beer that made a change from the hop bombs tasted earlier.

Decided to change coasts and have an Anchor Summer Beer – another light one at only 4.6%. The San Francisco-based Anchor Brewery were one of the first American breweries I tasted about 20 years ago and their beers never fail to impress.

Perusing the beer list, the Brooklyn Brewery Black Chocolate Stout stood out and not just because it weighed in at 10% - it's been quite a while since I tried an Imperial Russian Stout so that was the next beer to try. Rich, dark and tasty, this is a beer meant for sipping. By now my tastebuds were becoming slightly tired so had to decide on one last beer to go for – went for a bottle of Flying Dog Raging Bitch, my favourite beer of the festival.

All in all this was a good little festival at the City Arms, giving customers a chance to try beers not usually available in Cardiff. With German and Belgium beer festivals being planned for the pub, the City Arms is becoming the best beerhouse in the City.

Popped in again on Monday night (tonight) for another bottle of Flying Dog Raging Bitch.

The beer festival is continuing this week until the beers are sold!

sounds a great festival, Brains indeed need congratulating.
Flying Dog dog do some great beers, the Culverhouse Tesco used to stock some but no more alas.
I love the Gonzo label element too.