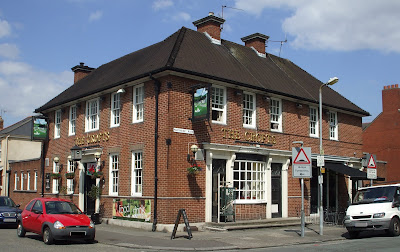 The Crofts,  14-15 Crofts Street, Roath, Cardiff, CF24 3DZ
Facebook Page
Situated in a residential area of Cardiff, the Crofts was built in 1957, replacing an earlier pub known as the Crofts Hotel that dated back to 1867 but had been destroyed during the Cardiff Blitz between the 2nd and 3rd January 1941. Built out of brick, today the Crofts is a two-story street-corner pub with sash and dormer windows and is slightly larger than the original building on the site, the rebuild encompassed two neighbouring properties that were also destroyed. Originally owned by local brewers Hancock's, the Crofts later went into decline under Welsh Brewers and a pub company before an enterprising local company bought the pub and have set about improving this back street community local. 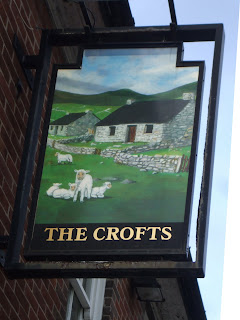 The Crofts still retains its original two bar layout, with an impressive wooden front door leading to the surprisingly large bar area with its red leather-coloured settles, tables and bar stools. There is even room for a dartboard in one corner. This public bar is also home to Crofty, an African Grey Parrot whose whistles and calls keep the customers and passers by amused in the warm weather as his cage takes up a doorway to the side. In the colder weather, a wood-burning stove is situated in the fireplace. The bar itself is carved out of mahogany and the dark wood panelling extends around the door frames and above the bar. The original deeds to the plot of land the pub was built on are framed and mounted on the wall of the bar.
At the moment, only one real ale is served and this alternates between the house beer 'Parrot Beer' and guests such as Sharps Doombar from Cornwall and Charles Wells Bombardier, a rare outlet this far West for the Bedfordshire Brewery.
A door to the left-hand side of the bar leads to the toilets and, more surprisingly to a wooden-clad skittle alley. This area will be used in the future for exhibitions from local artists. The corridor also leads to the lounge/dining area which is also accessible via the glass fronted doors on Partridge Road. The lounge features plenty of seating and on a wall is a large photo of Winston Churchill waving as he was driven past the bomb-damaged pub on his visit to Cardiff on the 14th April 1941. The pub can be clearly recognised by the Hancock's Toastmaster sign hanging from the wall.
At the rear of the Crofts is a patio area that features a covered smoking section.
At the moment the Crofts only does food from 11-3 as well as Sunday lunch, wherever possible local produce is used with allotment-grown fruit and vegetables being utilised alongside other locally-sourced ingredients such as fresh fish delivered daily.  There are set menus featuring pub favourites as well as home-made specials on chalkboards which change regularly but can feature such favourites as Pea & Ham Soup and Turkey & Ham Pie. Vegetarians are also catered for with Glamorgan Sausages and other options available.
View Larger Map