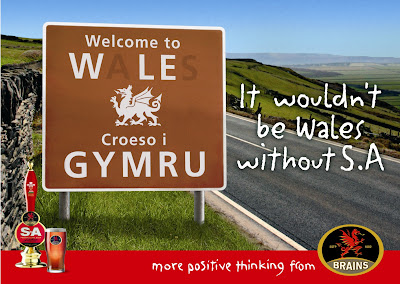 From Welsh Icons News site where their Art Director Norris Nuvo has penned this piece of pintly prose:

When I say beer I mean bitter, not girly larger brew
And not that black and inky stuff that tastes like Irish stew.
Brains SA’s my favourite, made here in the ‘diff
Poured straight from the barrel and necked down in a jiff

Years ago there was little choice, and most beer was appalling
As fizz and keg became the norm, the standard kept on falling
Double-bloody-Diamond and Worthington bloody E
Tasted like old scrotum sweat laced with stagnant pee

Now my da he liked ‘Albright’, but it left you feeling foul
There was no taste and it was weak, and it turned my bowel
Now Dark is fine for old men or blokes with beards and pipe
And as for Welsh Bitter, well it just tastes like rancid tripe

There are now a lot of ‘real ale’ brews all across the land
With silly names like Badgers Snout or Vicar’s Shaky Hand
Or Bishops Cock and Benders Fudge and even Bowel Thunder.
But they don’t agree with me and make me want to chunder

I tried a larger once, it made me sad for it was devoid of flavour
For I like a pint to have some taste, something I can savour
So, Brains SA is the beer for me, It’s my favourite tipple
Brought up on it I was, on tap from my mam’s nipple

If you want to listen to the poem - check out this link to the Welsh Icon's site where it is available to download and be used as a ringtone if you wish!

Giving McGonnigle (sp?) a run for his money.