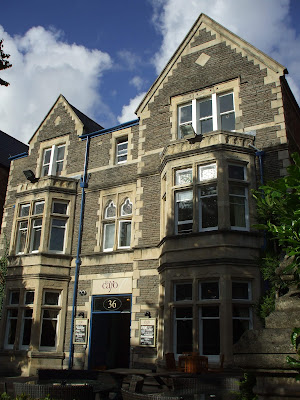 Cayo Arms, 36 Cathedral Road, Riverside, Cardiff, CF11 9LL
Open all day.
Set in the Victorian tree-lined splendour of Cathedral Road, the Cayo Arms was originally built as a private residence before being converted to the Apollo Hotel and then renamed the Cayo Arms in 2001. The pub was renamed in honour of Julian Cayo-Evans, leader of the Free Wales Army and his picture adorns the pub sign outside. At the time of the name change the pub was owned by Tomos Watkin Brewery, then Celtic Inns and is now owned by Burton-upon-Trent brewers Marston's, who have recently refurbished the pub. The Cayo Arms has previously won the Cardiff CAMRA Pub of the Year Award.
The Cayo is entered via a central doorway, with greetings in both Welsh and English and the bar servery is on the left hand side of the pub. Dark wooden floors and matching bar with an ornate back bar gantry fit in well with the original Victorian plaster mouldings on the ceilings. Some original stained glass windows are also still in place. Despite the original partition walls being removed, the Cayo offers a choice of seating and dining areas as well as a function room available to hire out. Raised seating to the right hand side and towards the rear provide separate areas of the pub to enjoy. Outside drinking areas to the rear and front provide a rare opportunity this close to the City Centre to enjoy an alfresco drink and meal. The Cayo Arms also does accommodation, with five bedrooms available. 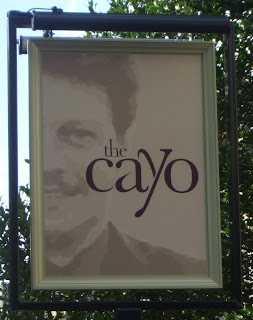 Five real ales are always available via the gleaming brass handpumps. Beers from Marston's various  breweries such as Brakspear and Ringwood do dominate on the bar, although independent Welsh brewery Tomos Watkin has a presence with their golden, hoppy beer Cwrw Haf and occasionally their stronger bitter, OSB, making appearances on the bar. Bottled beers from Innis & Gunn and even the Czech lager Budvar and a Belgium bottled beer are also available as well as Franziskaner from Bavaria and Peroni from Italy available on draught. Beers are served in branded glassware with the real ales being served in an unique glass with etched beer quotations on it. An extensive wine list is also available and is chalked up on a large board in the seating/dining area. A good innovation is that Marston's Brewery supply a newsletter in the pub giving details of their guest beers and even suggesting which foods go well with what beers. Food is available all day from an extensive menu with beers occasionally being used in the food such as Peroni-battered cod.
The Cayo features regular live music on Sunday nights with a strong focus on traditional Welsh music.