The King's Arms in Abergavenny is one of the best pubs in Wales. Rescued from near dereliction by new owner Ben Jones, the pub has been carefully restored and is once again one of the delights of visiting Abergavenny. At the recent food festival the beer was so good there and very reasonable at only £2 a pint that a few of us stayed sitting outside the pub, drinking their locally-brewed Tudor ales and watching the firework display rather than go for a pint elsewhere. An excellent pub which even features a cinema in the former Delafield's Brewery building towards the rear.
So what is wrong here?
Step forward a jobsworth employed by Monmouthshire Council........ 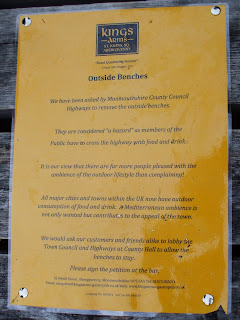 .......who has decided the benches opposite the pub are a hazard and should be removed!
Well during the Abergavenny food festival which attracted around 40,000 people to the market town how many people were injured by this "hazard"? None. So instead of picking on local business why don't Monmouthshire Council actually get behind local businesses and support them!
Oh and if you are in Abergavenny get to the pub and sign the petition and have a pint or two of the local brew from Tudor Brewery!