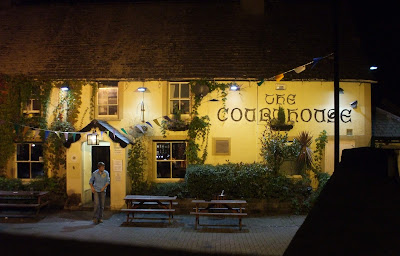 How to improve a pub
On a recent visit to Caerphilly I visited a couple of pubs as had some time to kill between buses home. Caerphilly really is crying out for a decent pub in the centre. Close to the bus station is the delightfully named Irish Tymes which appears to be the largest pub in the town and was once known as the Railway Inn when owned by Rhymney/Whitbread Breweries. Keg only so did not bother going in.
Further downhill is the M&B pub, the Kings Arms. Not too bad with Everards Sunchaser as a guest beer alongside up to 2 other real ales. Bright, clean, well-lit and popular with plenty of attentive bar staff, the Kings Arms offers the most consistent pint in the town. Not too many people drinking the real ales but quality not too bad.
Further down the hill again is the Court House, once a regular in the Good Beer Guide and even made it's own cheese some years ago. This should be the jewel in the crown of Caerphilly pubs, said to date back to 1320 with fantastic views of the castle to the rear, old stone walls and fireplaces this has everything you would want to see in a pub. Unfortunately it is let down by the management and staff. I should have been put off by the multitude of stickers in the front window telling me how many different CCTV cameras there are – always a nice way to welcome customers into your pub. The other windows were dirty and the remains of other window stickers were stuck on the panes. Only one handpump, serving Greene King Abbot – I only went for a half and it was an average half of an average beer. Walking towards the rear of the pub to look at the floodlit castle I was going to sit here but the tables were unlit – it may be saving a dolphin somewhere in the world but a dark and dingy pub does nothing to attract customers so I settled for a table in the front bar. A cheap speaker blurted out some piped music – if you are going to play music and pay the license for it then at least have a decent speaker system – the cheapest ones from Argos may be okay for a student bedsit but not suitable for a pub. Bizarrely in another corner Eastenders was blasting out from a wall-mounted television. Not that the half a dozen or so customers were interested in the music or television. The amount of laissez-faire shown by the customers was only matched by that shown by the barmaid who was busy chatting on the telephone when 3 customers walked in, went out the back and walked out again without so much as a acknowledgement from her. That's 3 customers lost who will no doubt tell others about the warm welcome they received in this pub. Sat at a table in the front bar I mistakenly put my arm down on the table, only for it to stick to the table, yes you have guessed it, this table had not been cleaned! Not the type of place to order food if their front of house cleanliness is not up to much. The table had also been vandalised by some chav who had seemed to think it was necessary to carve her name into the table top.
How to improve the Court House, Caerphilly (free advice):
Pubs are in a bad enough state already with falling customers numbers and if landlords are not prepared to do the simplest measures to encourage customers to go into their pubs then what hope is there for pubs like this? There is a rumour that Wetherspoons will be moving into the old Post Office building in Caerphilly, now that will no doubt cause around 4 Caerphilly pubs to close as this is what happens elsewhere in South Wales when a superpub opens. Should also give the other pub landlords a well-deserved kick up the arse to clean their pubs.
All in all the visit to Caerphilly was not entirely wasted, as on the way home I alighted from the bus in Machen and paid a visit to the White Hart for a superb couple of pints of Wye Valley HPA. The White Hart is a truly outstanding pub, decorated with wood panelling and other features from the liner the Empress of France which was scrapped in nearby Newport. Always an enjoyable pint to have here with friendly bar staff and chatty customers. A certain pub in nearby Caerphilly could do a lot to learn from the White Hart.

Please note that the Court house pub has new Staff and management from Feb 2012, the previuos manager was useless I agree.