News from Brains:
After a third Grand Slam victory at the Millennium Stadium on Saturday, the Welsh Rugby Union has announced a significant new partnership with Welsh brewer Brains and the UK’s leading brewer and cider producer Heineken. 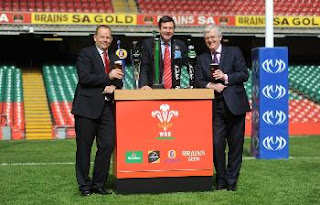 Heineken will be installed as Official Lager and Cider Partner to the WRU and Millennium Stadium in Cardiff, whilst Brains will remain as the official ale of the WRU until 2016.The deal follows Wales’ hugely successful Six Nations campaign which saw the team crowned Grand Slam Champions for the third time in seven years.

The new agreement, which will commence in June 2012 and will run until 2016, will see Brains beers, including SA, on sale in stadium bars alongside leading lager and cider brands Heineken, Foster’s and Strongbow and will include a comprehensive rights package enabling both brands to engage with the Welsh public as of the commencement date.

Brains began working with the WRU in 2004, when their ale became the first Welsh brand to sponsor the senior team jersey – and has since become one of the WRU’s key partners. The Brains’ name was emblazoned on shirts during a period in which Wales won two Grand Slams in 2005 and 2008. In 2010 Brains switched its sponsorship, becoming ‘official ale of the WRU’.

WRU Group Chief Executive Roger Lewis said: "The partnership with Brains has always been strong and this new, complete deal with Brains and Heineken combined, further cements that relationship.

"These brands are both extremely strong and therefore amalgamate effectively with the WRU brand and we are delighted to be able to continue to grow this relationship over the next four years.

"We have experienced three Grand Slam victories in the time Brains have been one of our partners and the four Heineken Cup matches hosted at the Millennium Stadium have all been commercially successful for both the WRU and Heineken and we look forward to more successes in the future."

Scott Waddington, Chief Executive at Brains, said: "Since 2004 more than a million pints of Brains have been sold in the Millennium Stadium and countless more in Brains pubs on match days. We’re delighted that the strong relationship we’ve established with the WRU will continue and look forward to starting a new marketing partnership in the UK with HEINEKEN, who are one of world sport’s foremost sponsors.

"It is fantastic to have been able to celebrate the Welsh rugby team’s achievements over the last eight years and we’re predicting more of the same for the next four years. With a bit of Brains’ positive thinking, here’s to becoming the ‘official ale of World Cup winners 2015’."

Lawson Mountstevens, Managing Director, UK On Trade at HEINEKEN, said: "Heineken and Foster’s are both showing strong growth in Wales and the new agreement signals our commitment to maintaining this brand momentum to drive sales still further in the country. Strongbow has long been the most popular cider in Wales and the new partnership will bring the nation’s favourite cider brand back to the Millennium Stadium.

"Having hosted four Heineken Cup finals in the last 10 years, we know the Millennium Stadium offers an outstanding showcase for our brands and, as an official sponsor and supplier to the London 2012 Games."

•2011: Wales reaches the semi-final of the Rugby World Cup

•Heineken is the sponsor of European Club rugby’s premier competition, the Heineken Cup

•Heineken is an official sponsor of UEFA Champions’ League football