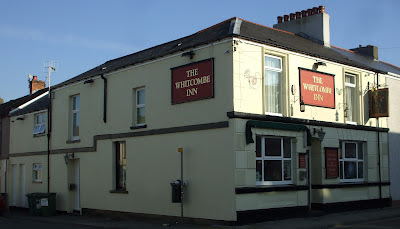 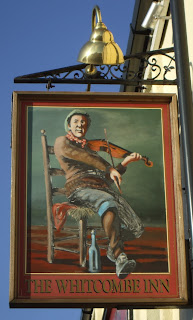 The Whitcombe Inn is situated on the junction of Whitcombe and Pembroke Street, in this mainly residential area of Aberdare in which the most of the street corners seem to have pubs built upon them. This area of terraced houses was built in the nineteenth-century. The Whitcombe features a decorative pub sign hanging outside of someone playing a violin and a bottle of wine beside his chair.

The pub was originally owned by Rhymney and later Whitbread breweries but today it is a welcoming free house. The pub was first mentioned in 1861 when it was known as the 'Hen and Chickens Inn'. There is a village of Great Witcombe in Gloucestershire and a nearby pub is called the Gloucester Arms, the connection being that this area of Aberdare was built on the glebeland of the nearby St John's Church, founded around 1200, which was owned by the Dean and Chapter of Gloucester. The Gloucester location has dropped its 'h' in recent years.
The Whitcombe Inn has a traditional look to the interior of the pub with wooden fittings throughout, from the panelling around the door to the old bar counter with its intricate joinery and sloping panels. The front bar room also features an interesting collection of old photographs – across one beam are photographs of the old pubs of Aberdare – many have been demolished over the years – and another collection is of old mining photographs – a reminder of the main industry that used to serve this area years ago. The pub features a fireplace in one wall with exposed brickwork surrounding it whilst on the opposite wall a wooden frame surrounds what was once the fireplace there.

The wooden bar features three real ales, all served from gleaming chrome handpumps with Wychood Hobgoblin and Brains SA being the regular beers and the third pump being reserved for a guest ale, the most recent one being Dirty Tackle from Wychwood Brewery in Oxfordshire. Tomos Watkin Taffy Apples Cider and 1879 Lager are also available in this free house.

Either side of the bar are two passageways leading a couple of steps down to the games room with a pool table and a darts board. The pub has very successful teams as is shown by the display of cups and shields in the bar won by the locals over the years.

The pub features two big projector screens for use during major sporting events but usually it is conversation that dominates in this friendly locals' pub.

Free WiFi via The Cloud is also available at the Whitcombe.

Whitcombe Inn is now selling local brewers Grey Trees Ales .it has 4 pumps dedicated to their ales.the pub can now be found in this years good beer guide .

The Whitcombe Inn is now selling local new brewers Grey Trees ales.it has 4 pumps dedicated to their ales .the pub is now in the good beer guide 2013

Had a lovely pint of Greytrees Ale there recently.