Wales gets its first beer sommelier 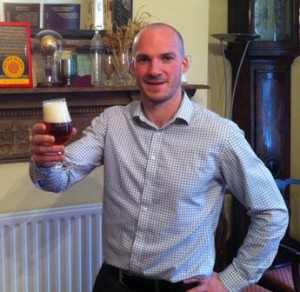 After starting his employed life with Butcombe Brewery as a cask washer and general worker some 20 years ago, Tom Newman left and set upon his new career as a water engineer. 10 years later after achieving a post graduate and chartership in water engineering, Tom decided take a U-turn by returning to his passion and past-time of brewing. In 2003, after persuading his Welsh father to allow him to construct a brewery in his garage the business set off. Now, nearly a decade on, after 2 expansions Tom is back in his family land of Caerphilly receiving a number of National and International awards for his flavoursome high-end organic beers with his Brewery ‘The Celt Experience’. Now as a newly qualified Beer Academy Sommelier (first in Wales!), Tom intends to travel both locally to his Welsh accounts and globally to his importers to encourage the fusion of a fantastic range of beers with flavoursome food dishes.

When asked on what his new qualifiction meant to him Tom replied “its simply a qualification of responsibility (to educate). Not only does this demonstrate a commitment of the sommelier to understand and respect differing flavours and styles of beers, but more importantly enables us to convey this information in an exciting way to the growing world of beer drinkers wishing to explore!”

“There is an enormous public thirst to find out more about beer. How different raw materials and brewing techniques are used to produce a dazzling array of flavors and styles. And which beers go best with which foods. The public are looking with for people who combine technical knowledge about beer with the knack of being able to communicate simply and clearly. This is what Beer Academy Sommeliers are all about.

It’s great that Wales now has its first Beer Sommelier to spread the word about beer. But it’s a big country and hopefully Tom will be the first of many!”

Locally, Tom is planning to run a beer academy event at his brewery in Caerphilly, which is currently expanding. “We are going to run a free event for Caerphilly, which will demonstrate how exciting a variety of Welsh beers can be when drank the correct way ot matched with delicious local dishes”, he said.

The explosion of craft beer is an international movement and The Beer Academy provide a fantastic ground to nurture talent to educate drinkers in the most exciting manner.