Clytha Festival is on! 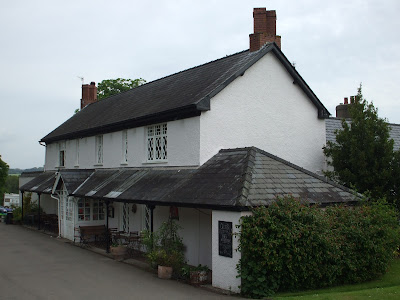 Clytha Festival 1st-5th June 2012
Despite rumours to the contrary, the annual festival at the award-winning Clytha Arms IS happening this year, although without the input from the Welsh Perry and Cider Society who have decided to hold their own rival festival in the middle of nowhere at the same time. After running up debts of, according to reports somewhere in the region of £30k, at their 'Middle of Nowhere International Cider Festival' at Nelson last year, the Welsh Perry and Cider Society are now holding their rival festival at Unisthee Rugby Club, a place that does not even see the sun after 3pm when it sets behind the mountains! Would put a link to the venue but even Google Maps can't find it!

According to the Welsh Perry & Cider Society  "We've moved because we've outgrown the venue. The Clytha Arms are still running a small cider festival at the pub"
This is not true, the WPCS have decided to go it alone and pulled out of the Clytha only a few weeks ago. I've seen the emails and the WPCS is putting out some rather negative and untrue comments about the Clytha. As the WPCS is funded by the taxpayer they should not be getting involved in negative petty personal disputes but should be supporting rural pubs like the Clytha; not engaging in petty little arguments like this. Also it will not be a 'small cider festival' as the WPCS but a larger festival with more stands, live music and ciders and perries from not just Wales but Herefordshire as well with Gwatkin, Olivers and Ross-on-Wye to name but a few.

The Clytha Arms is, without a shadow of a doubt, one of the best pubs I have ever been in and their regular festivals are always very popular. They ran a cider festival before the WPCS was even in existence and will continue to do so when the Government (ie Taxpayer) funding for the WPCS finally runs dry and the WPCS is no more. The Clytha Cider Festival will be a great occasion to get out and support a rural pub and local cidermakers.

Where could be better to hold a cider festival but in the grounds of the fantastic Clytha Arms, watching the setting of the sun over the Brecon Beacons and enjoying great food and company?
Certainly not in a Welsh village such as Unisthee, set in a valley that has seen better days and one most people would not even consider going to at night!

Ynysddu. Guaranteed to rain, no camping, full of valleys boys with spliffs and baseball caps. No thanks.

Really looking forward to the 2012 Cider Fest at The Clytha.

The music line up looks amazing!

The Camping is already SOLD out.