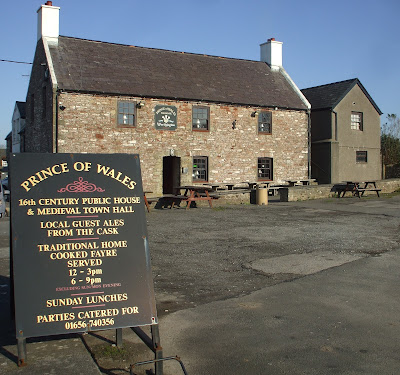 Prince of Wales, Maudlam, Kenfig, Bridgend, CF33 4PSOpen All DayThe Prince of Wales stands as an isolated stone-built building overlooking the shifting sands of the Kenfig Burrows. This building was originally the town hall of the ancient Borough of Kenfig, not the modern conurbation that now bares the name.

Above: the view from the pub to across the sands

The rest of the old borough has been enveloped by the sands over the centuries but the town hall hall still stands, defiantly overlooking the sands and the Bristol Channel, after 500 years. The town hall part of the pub is on the first floor, accessible only from the exterior of the building. Believed to date from around 1600, this Tudor structure was thought to be originally built on pillars , later stone walls were built on the ground floor to create a pub, 'The New House Tavern' or 'Ty Newydd' and later called 'The Corporation', which was again altered in 1808 and renamed the Prince of Wales after the Prince Regent who later became George IV.  The pub and the village of Kenfig are due to feature in a forthcoming (11.03.12) episode of Time Team.
Set in its own grounds with an extensive car park and outside drinking area, the pub is entered via an off-centre door and corridor which leads to the bar. To the left of the corridor is a small room with a number 2 above the door, a reminder of the times when each room in a licensed premises had to, by law, be identified. The law altered in the 1960s but that number is just a small reminder of how little has changed in this pub over the years. This small room contains tables and settles and is decorated with sea charts and photographs ofshipwrecks from the nearby coast. Due to the historic interior of the Prince of Wales it features in the CAMRA book the 'Real Heritage Pubs of Wales (see below).The bar features no handpumps, the real ales are served straight from the barrel from another room and include Bass, Sharp's Doombar as well as a guest beer. 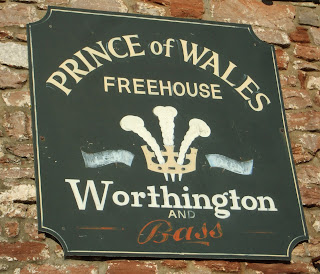 The larger room, to the right of the corridor is decorated with photographs of locals and has a full list of all the Portreeves or wardens appointed by the Borough of Kenfig since their charter was signed in medieval times. The pub features snippets of local history on most of the walls, but the end wall is taken up by a large stone fire-place and chimney, the wooden logs for which are stored in ancient burnished copper cauldrons either side of the welcoming fire. Old wooden doors and thick stone walls that defy mobile phone signalsmake the Prince of Wales a quiet and welcoming pub, there is a flat-screen television but this is only used for major sporting events and in this pub that means rugby not football.
Food is served 12-3 and 6-9 and the menu features Welsh specialities such as locally made faggots and Welsh lamb as well as traditional pub fayre such as lasagne and grills as well as more unusual specials such as Bengali Cod or Cajun Beef in a Stilton sauce.
The Prince of Wales has a large car park outside or there is a bus from Bridgend/Porthcawl (63B) every couple of hours during the day.


The Prince of Wales features in the CAMRA book 'Real Heritage Pubs of Wales'.