Save the Pub with UKIP 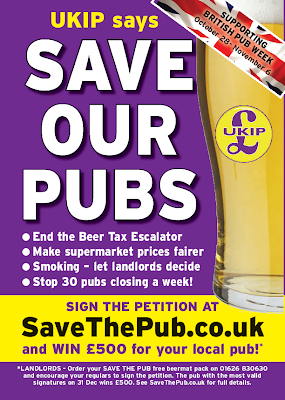 The United Kingdom Independence Party have recognised the problems facing British pubs and have launched a campaign to save them.
Head over to their site, to sign the petition


There is also a booklet to download which gives some British Beer and Pub Association (BBPA) facts:

UKIP actually come up with some useful proposals to save the pub:
• UKIP will institute a Royal Commission to investigate the pricing structures used by the breweries through pubcos, in particular; the Royal Commission will investigate the pricing structure used by breweries in their captive markets for bulk packaged wholesale goods and the cost of sales to
supermarkets. This pricing makes the cost of wholesale prices, from tied sales from a pubco or even independent wholesalers, more expensive than some retail beer prices in supermarkets. UKIP will insist on reduced differentials and a fairer balance in beer pricing between on and off-trade beer sales.
There is a Facebook Cause asking for this, please click on this link
• UKIP would cut duty and taxes on traditional draught beers such as real ale, ciders and some lagers. UKIP would also allow landlords to write off against tax promotional costs for traditional beers through pub posters, beer mats and giveaways.
Any tax cut is good for the trade theses days.
• UKIP would reduce both EU derived regulations and UK regulations /controls. Will tone down enforcement regimes, involving various licences, permits, certificates, surveys, reports, audits, contracts, procedures, assessments and policies. This would free up landlords/managers and reduce
costs. In so doing, it will allow the landlord/owner more time for the marketing of their pub/club and the organising of promotions.
A reduction in red tape is also good for the trade
• UKIP would amend the smoking ban to allow pub landlords and club managers to provide contained and ventilated 'smoking rooms' within pubs and clubs. This is in pubs and clubs where the customers desire it and the landlords or pub companies wish to invest in such a facility. This proposal also brings benefits to residents in reducing noise and intrusion from outside smoking areas, which can be uncomfortable and antisocial for users. It also removes the risk for landlords/managers of sizeable fines being levied by local councils.
Freedom to choose to smoke or not in pubs is also a good idea.
All in all a lot of positive ideas there to help the pub trade out.

Labels: Save the Pub, UKIP

Yes, absolutely. None of the three "main" parties seem to give a shit about pubs, to be honest.