Model Inn to reopen as a restaurant 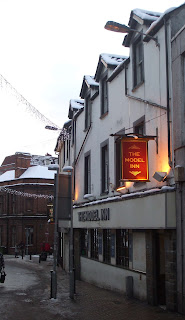 After being closed for almost a year, the historic Model Inn on Quay Street, Cardiff is set to reopen in December as a restaurant - still owned by Wales' biggest cask ale brewers, SA Brain.

Now I'm all for saving pubs but the problem with the Model Inn (pictured in the snow last December) was that it had become rather tatty to say the least. Here's what I wrote about the closure last year:

"The Model Inn has seen better days, the pub has been in a slow decline for years with its dark and dingy interior hardly providing a warm welcome to customers. The pub stopped doing food some years ago, though the tiled roof of the food servery is a classic example of late 1960s/early 1970s pub refurbishments. The odd bits of wood around the bar do nothing to attract customers into this surprisingly spacious City Centre bar, though the Brains Bitter was spot on when visited the other night. In the week before Christmas, other pubs were packed; the Old Arcade, Duke of Wellington, City Arms, Goat Major, yet the Model shut early at half six due to lack of custom."
The Model Inn also lacked a smoking area, apart from the street.

Originally called the Ship on Launch (this is Quay Street after all), a building on this site is clearly marked on John Speed's map of 1610 and was renamed the Model Inn, according to tradition, after Cromwell's New Model Army were billeted there during the civil war.

In 1956 The Model Inn was purchased by Cardiff brewers SA Brain, from wine merchants Greenwood & Brown, together with 4 other pubs for around £100,000. The other pubs were the York Hotel on Canal Wharf (Still standing but has been closed for 20 years and is awaiting demolition), Vulcan (still open, just), Ship Hotel (closed) and the Cross Inn on Newport Road, Rumney (still open)

The refurbished Model Inn will be renamed Greenwood & Brown after the previous owners of the building.

It's good to see a pub being refurbished at last, I'm not mourning its loss as a pub, the fantastic City Arms is just a couple of doors away so it would be stupid to have 2 pubs competing for the same custom in that small area, especially as their is a Chaverspoons nearby as well. Also it provides an alternative to the 'Dine for £1.99' offer in the City Arms - pickled egg and a pack of crisps! Some may see this as Brains diversifying from their core business, put together with the recent purchase of Coffee#1, but in the twenty-first century family brewers are having to diversify in order to survive. I'd rather see a pub that cannot succeed reopen as a restaurant than lie derelict, especially when there are other good pubs nearby.

Press release from Brains below:
The Model Inn, on Quay Street in Cardiff City Centre, will reopen in early December after major internal and external refurbishment. Reopening as ‘Greenwood and Brown’, the new venue will operate as a bar and grill, serving simple, great quality food.

The Model Inn has been part of the Brains family for more than half a century. In 1956 Brains bought the pub from a local wine merchant, Greenwood and Brown – which provided the inspiration for the name.

Philip Lay, retail director at Brains, explains: "Food is becoming an increasingly important part of our business, and across our managed pub estate now represents 35% of total sales. Greenwood and Brown therefore feels like a natural progression for us.

"We already have a great pub on Quay Street in the City Arms, which serves 35 different types of beers and ciders. Greenwood and Brown will offer something completely different, and we think it will be a great addition to the area."