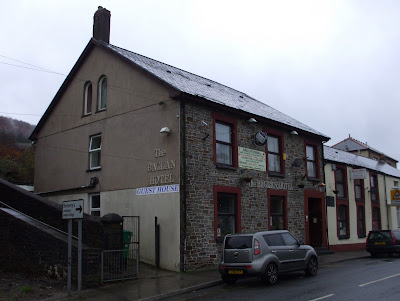 Baglan Hotel, 30 Baglan Street, Treherbert, CF42 5AW
Open all day
The Baglan Hotel is a stone-built pub on the outskirts of Treherbert, close to the train station of Ynyswen and with bus stops nearby. Dating from 1855, this pub was originally owned by the David John Brewery of Ton Pentre who were bought by Webbs brewery of Aberbeeg and who, in turn became part of  Welsh Brewers. For a while, Ushers Brewery of Trowbridge owned the pub but the Baglan is now a freehouse. An old sign from the former Crown Buckley Brewery hangs outside the pub. The pub has been in the same family for over sixty years and the current landlord was born in the pub.
The central doorway leads to the stone-flagged bar on the left-hand side of the pub, this room is decorated with pictures of the many celebrities who have stayed at this pub over the years as well as  old photographs of the pub. One unusual visitor to the bar was a horse which was sold in here, only for the buyer to later discover it had not been broken in. Another photo is of the current landlord's father who is pictured behind the bar wearing his tie and braces with the Webbs Brewery pumpclips on the handpumps. There are also pieces of old brewery memorabilia including a rare Webbs mirror and a large collection of beer bottles.

Around the corner from the bar is a dartboard and there is also a large flat-screen television, as horse racing is popular with the locals who drink in here. However it is conversation that dominates in this Rhondda Valley pub. There is plenty of seating, from high chairs at the bar to settles and traditional pub couches with the three-legged cast iron tables to rest your drinks on.
Four real ales are served from gleaming chrome handpumps, as this is a freehouse the beers change regularly but beers from Brains, Tomos Watkin , Felinfoel and RCH breweries feature regularly on the bar. Two draught ciders from the award-winning South Wales cidermaker Gwynt-y-Ddraig are also available together with a range of their bottles.
The Baglan Hotel also serves food, from a traditional pub menu and breakfasts are available from 0730 in the morning. The more comfortably furnished lounge bar is used for dining. Booking is advisable for Sunday lunch. 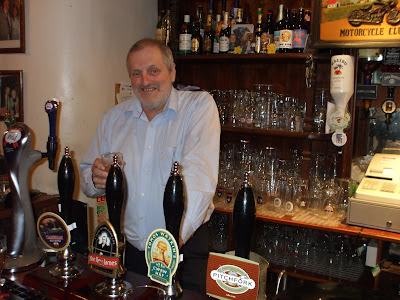 Above: the landlord of the Baglan Hotel
Google Map:
View Larger Map

Traveline Information:
The Baglan is a short walk from Ynyswen train station or there is a bus stop (No 130) Pontypridd - Blaenrhondda nearby.