It's always sad when someone loses their job, unless that person is the neo-prohibitionist boss of fake charity Alcohol Concern, Don Shenker. News broke this morning that after the taxpayer-funded fake charity Alcohol Concern lost their main source of funding from the Department of Health they could no longer afford to pay their Chief Executive and Shenker has been shown the door.
I will be raising a glass or two later this evening to the memory of this lying little shit who manipulated data and took taxpayers money to fund his half-truths and misrepresentations. This is the one good the thing this Government have done - stop wasting public money on neo-prohibitionist organisations who have their own narrow-minded ideas. Hopefully this is just the start and the next fake charity to be culled will be Shenker's bastard offspring, Alcohol Concern Cymru, though with the socialists in power in Cardiff Bay their funding by the taxpayer looks set to continue.
"The problem with socialism is that you eventually run out of other people's money to spend"
A problem the Welsh Government are finding themselves in at the moment - here's a hit don't spend £250,000 a year on fake charity Alcohol Concern Cymru.
Hope some prospective employers have taken time to google Don Shenker, the first three hits are rather interesting: 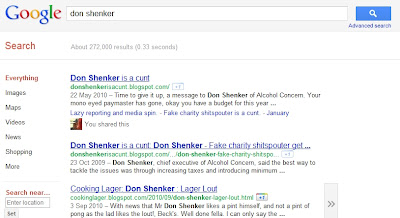