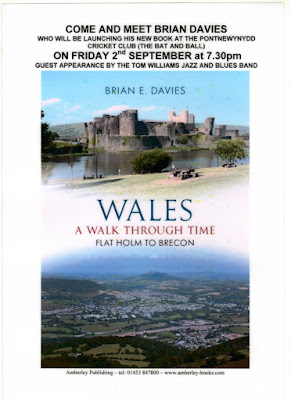 Mumbles-based author Brian Davies will be launching his second book Wales - A Walk Through Time at Pontnewynydd Cricket Club on Friday 2nd September.
Using a historical perspective to enrich the journey, Wales: A Walk Through Time describes a unique walk through a remarkable country. Illustrated with a fascinating collection of old photographs and contemporary images, the route has been specially chosen to explore the sheer beauty and diversity of Wales. It will eventually reach Anglesey, but in this first of three parts we are treated to the glorious landscapes and proud industrial heritage of South Wales. The journey begins with a boat trip to the interesting offshore island of Flat Holm, where Lighthouse Point marks the most southerly spot in Wales. The walk resumes on the mainland at East Aberthaw and follows the southern coast to Barry and Cardiff Bay, heading through the city to Caerphilly and the valleys. We are guided to Blaenavon World Heritage Site and Abergavenny, then along the Monmouthshire & Brecon Canal and through the Brecon Beacons National Park. On the way, we encounter characters such as Marconi, Captain Scott, Roald Dahl, Tommy Cooper and some of the heroes of Rorke s Drift. Events that shaped the nation s heritage are recalled, giving the reader a real sense of how the past is present at every step. And at certain points we cross the paths of earlier travellers, such as Giraldus Cambrensis and George Borrow, who had their own take on some of the places we visit. Each chapter covers a day s walking, full-colour maps show the way, and a number of tempting hostelries are discovered en route. But this is not simply a guide for walkers: the rich history and images within will have the broadest appeal.
Brian has previously and painstakingly researched the pubs of Mumbles and these appeared in his first book, Mumbles and Gower Pubs which has just been republished due to popular demand.