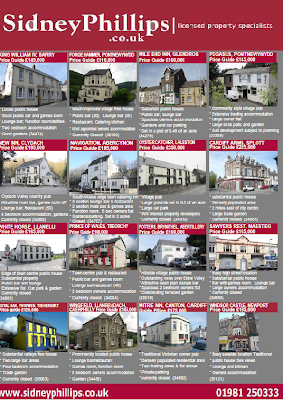 Wednesday 24th August will see another pub auction at the Celtic Manor, conducted by Sidney Phillips. At the moment the list of those pubs up for auction is below, catalogue can be downloaded from Sidney Phillips site here (pdf).

Once again we see more lots of pubs being sold off by pub companies and even a few by SA Brain.
NB pubs may be withdrawn prior to the sale so don't look at this as a comprehensive guide.
Brittania, Frogmore Street, Abergavenny (Guide price £175,000)
The earliest records of this Grade II Listed pub date back to 1741 when it was the Cock & Horse, the name later changed to the Three Kings and to the Brittania in 1821. Between 1983 and 1997 it was known as the Welsh Guardsman. Its always been a bit of a dark and dingy pub, I think I have only ever drank in there a couple of times. It's in a difficult place with the competing Auberge (former Herefordshire House) and the Coliseum (JD Wetherspoons) both nearby. More likely to be turned into retail premises than continue as pub as auction catalogue describes it as 'a development opportunity'. Rear garden used as a smoking solution.
Cilfynydd Inn, Cilfynydd, Pontypridd (GP £145,000)
Former Rhymney Brewery and Whitbread pub between Pontypridd and Abercynon. Actually trading successfully, unfortunately the pub co has decided to rid themselves of it, putting the current tenants out of work. Separate bar and restaurant. This pub could actually be a success if free-of-tie – just off the A470 and in a residential area.
Aberdare Hotel, Mountain Ash (GP £170,000)
Quite a spectatcular frontage to this pub, well for a nineteenth-century South Wales pub anyway. Bar/lounge and function room as well as an outside area. Seems like a good buy with net sales of £200,00 pa
Avondale Social Club, Mountain Ash (GP £50,000)
Large 1960/70s building 'in need of investment' according to the catalogue which usually means its in a right old state. Bulldozers on standby for a housing redevelopment I think!
Bevans Arms, Morriston, Swansea (GP £80,000)
S & N PubCo sell off. Large brewers Tudor pub, currently closed. Two bars plus a function room but no mention of a smoking solution in the catalogue.
King William IV, Barry (GP £145,000)
One of the smaller pubs of Barry but still with public bar, lounge, games room and function room together with gardens for a smoking solution. Set in a residential area.
The local community are trying to get enough money together to purchase this pub.
Maesllwch Arms Hotel, Glasbury-on-Wye, Herefordshire (GP £325,000)
Described as 'a character period hotel' according to reviews on Beer in the Evening this pub took a steep nosedive after a succession of tenants attempted to run this Enterprise Inns pub. 'Available for a variety of uses' according to the catalogue, which does cast doubt on its future as a pub.
Mile End Inn, Glendross, Swansea (GP£160,000)
Three-storey building in .48 of an acre with gardens and car parking. Conversion to residential flats is a possibility with this pub.
New Inn, Clydach, Swansea (GP £195,000)
Currently closed but with a main bar, games room, restaurant and gardens. Was featured in the 2011 edition of the CAMRA Good Beer Guide. Next to a RSPB nature reserve, this pub seems to be the gem in this sale.
Navigation, Abercynon, Mountain Ash (£185,000)
Three-storey historic building set in 2 acres. Trevithick's first ever steam locomotive ran from Penydarren to the canal terminus just outside the pub in 1804. Currently closed.
Oyster Catcher, Laleston, Bridgend (£350,000)
Currently closed, the Oyster Catcher is a Grade II listed building reputed to date from the 1500s, with 18th Century additions. The catalogue mentions it 'will interest property developers'
Cardiff Arms, Splott, Cardiff (GP £225,000)
Former Brains pub, this three-storey corner building looks like a prime candidate for conversion to flats. Built in 1896. The owners of the nearby Grosvenor Hotel were granted permission to demolish their pub and replace it with a block of flats, perhaps a similar fate awaits the Cardiff Arms?
Prince of Wales, Ton Pentre, Treorchy (GP £100,000)
Former Rhymney/Whitbread pub with public bar and lounge. Another change of use?
Potters, Brynithel, Abertillery (GP £100,000)
Being touted as 'possible conversion to restaurant use'.
Sawyers Arms, Maesteg (GP £165,000)
Currently closed, this large two-storey pub is in the centre of the town and was formerly owned by Brains.
Wingfield, Llanbradach, Caerphilly (GP £165,000)
Large pub which in the past has had a good reputation for food.
White Horse, Llanelli (GP £165,000)
Situated on the outskirts of the town, this is another former Brains pub and was once owned by Buckley's Brewery.
Royal Oak, Ynyswen, Treherbert (GP £120,000)
Another closed pub with 2 large bar areas and a smoking solution to the rear.
Forge Hammer, Pontnewynydd, Torfaen (GP £110,000)
Currently closed, a detached building with bar, lounge and restaurant. Surprisingly low guide price for a building like this.
Pegasus, Pontnewynydd, Torfaen (GP £145,000)
'Suit development subject to planning' according to the catalogue.
Windsor Castle, Newport (£185,000)
A former Hancocks/Welsh Brewers pub in the centre of the city. Very handy for the bus station and used to serve a decent pint of Bass. A bit of an odd building as it has entrances on both Dock Street and Skinner Street despite not being on a street corner. Still under £200k for a City-centre freehouse, the only thing that lets this pub down is the smoking solution being the street and the structural problems causing the cracks in the walls.
Catalogue description is fun, especially from anyone who knows Newport:
'Busy seaside location. Traditional public house sea views'
Mitre, Canton, Cardiff (GP £175,000)
Another former Brains pub, a street-corner local in a densely populated part of the City – a residential conversion could be on the cards, but lack of parking may prevent planning permission.
One pub has so far been withdrawn from the sale due to being sold:
Golden Age, Broadway, Pontypridd
Used to be called the Railway and was a former Rhymney/Whitbread pub
Quite a comprehensive list, the previous auction at the Celtic Manor generated a lot of interest, though a lot of pubs failed to meet their reserve and were sold after the auction.