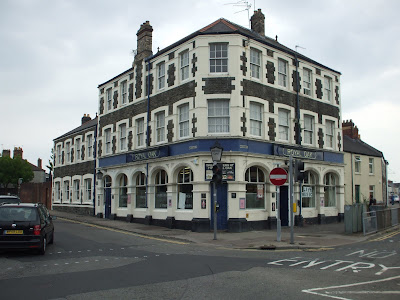 Royal Oak Hotel, 200 Broadway, Cardiff, CF24 1QJ
Open all day
Situated just off Newport Road, the Royal Oak is a famous Cardiff institution and is also one of the few relatively unspoilt pubs in the City. Built in the latter part of the nineteenth century, the Royal Oak is a large two-story building occupying a corner plot and is faced with local stone, though more exotic rocks are used in the construction as igneous rocks are visible in some walls, these were brought into Cardiff as ballast in ships from all over the world and were sold as building material. On the Beresford Road side of the pub there are four stained glass window screens, advertising 'Sparkling Ales' and 'Fine Old Jamaica Rum'. The inside of the pub is equally impressive with a long wooden bar counter featuring gleaming chrome handpumps serving Brains Bitter, SA and a guest beer, either from Brains own seasonal selection such as IPA or from another brewery. The Royal Oak used to serve SA from gravity but the beer now comes straight from the temperature-controlled cellar through the handpump, although it is served 'flat' without a sparkler that gives it the tight creamy head, as this is how the customers like it.
The bar features old high-backed settles, wooden tables with black cast iron legs and a wood-burning stove for the winter. Behind the bar, the wooden gantry features carvings and mirrors as well as more stained glass. There are two hatchways from the bar servery, allowing beers to be served to the other rooms. The lounge, situated to the right-hand side of the front door, ranks as one of the most ornate in any Cardiff pub with its black fireplace and intricate plaster mouldings on the walls. There is another doorway from the lounge to yet another room, the snug, a small, intimate room, again with a fireplace. It's no surprise that this pub is featured in the CAMRA booklet Real Heritage Pubs of Wales due to it's unspoilt interior. 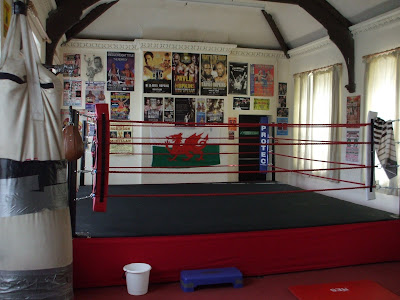 To the rear of the pub is a large function room and, more unusually, above this a room containing a boxing ring and gym. The bar is also decorated with boxing memorabilia, this connection goes back to 1925 when 'Peerless' Jim Driscoll, undisputed Flyweight Champion of the World, bequeathed his Lonsdale Belt to his cousin, Tom Burns, who ran the Royal Oak. The pub stayed in the family for most of the century, before Kitty Flynn, Tom Burns' granddaughter retired in 2003.
To the side of the function room is a corridor that leads to the surprisingly large beer garden with s smoking shelter.
The Royal Oak only does food on Sundays. Regular entertainment is provided throughout the week with bands on Fridays and Sundays, Open Mic night on Wednesdays and Poker Nights on Thursdays.
Google Map: