Andrew RT Davies, the South Wales Central AM and leader of the Welsh Conservatives in the Assembly, has commended the swift response from Public Health Wales and environmental health teams in dealing with an outbreak of E.coli in Cardiff. He also repeated his calls for the Welsh Government to urgently bring forward legislation to force public eateries to display hygiene scores.

Earlier this year, Andrew sponsored the launch of Consumer Focus Wales’ second annual progress report, which was established to monitor the progress made following the publication of the Pennington recommendations.

He said: “Regrettably it appears that these outbreaks are happening all too frequently. In 2005 we saw the tragic death of a very young child and in 2009 there was another serious outbreak in Wrexham.”

“It has taken an age for the Welsh Government to introduce legislation in this area, even though the Pennington Report was published some time ago now. This latest outbreak is proof, if proof were needed, that we need to introduce a ‘scores on the doors’ system which would shame owners into action; or, at the very least, give consumers all of the information they need to make a decision.”

Andrew added: “It is unfortunate that the Welsh Government are only now initiating discussions and consultation around this with a view to bringing forward a bill at some time in the future. They should be in a position to legislate now, not instigating yet more discussions.”

E.coli is a serious bacterial infection that causes stomach pain and diarrhoea; it is often passed on through contaminated food or water, or via contact with farm animals. Many people have long-term abnormal kidney functions following contraction of the infection, whilst some suffer other lifelong complications such as high blood pressure or seizures. In some cases infection can lead to kidney failure.

At the moment it is optional if premises wish to display their food hygiene scores or not, however a brief search on the net reveals the scores such as the one below: 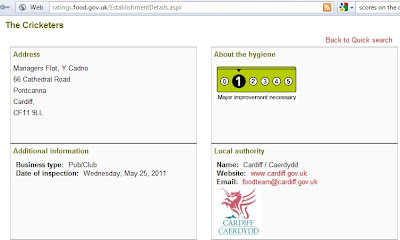 The pub stank of fish on a recent visit as well.
For more on Food Hygiene Scores take a look at Nat's place.

Labels: Scores on the doors

I always wonder whether these schemes are not to some extent the kind of "Quality Management" tick-boxing exercise that would assess Carling as a better beer than a cask offering from a micro-brewer.