All change at the City Arms 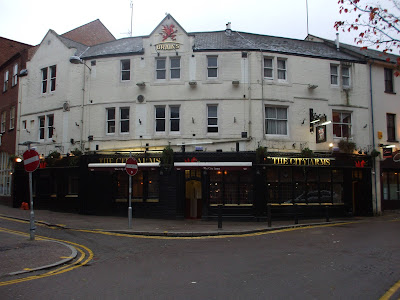 City Arms, 10-12 Quay Street, Cardiff, CF10 1EA
The City Arms is one of Cardiff's most famous pubs and has recently been given a refurbishment by Wales' largest real ale brewers, SA Brain.
A building on this site is marked on John Speed's map of 1610, although it is not known if it was an inn or not. Situated opposite the town quay, it would have been a good place for a tavern with the ships coming and going from the River Taff, which was not diverted to its present course until the nineteenth century. On a map of 1851 a beerhouse on this site is marked with the delightfully sounding name, “The Van of Flesh Tavern” and today this forms the right-hand side of the present building. 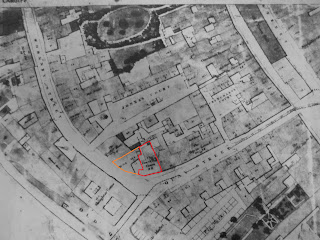 Above:1851 Cardiff Map with the "Van of Flesh Tavern" marked in red. The orange line shows where the pub called the City Arms later expanded into.
The wording on the map is somewhat indistinct and as a beerhouse it does not appear in the trade directory of the time, as only the more up market public houses and hotels are mentioned. By 1858 the building on this site was called “The Cattle Market Tavern”, as the cattle market was situated across the road from the pub, where the multi-story car park stands today. On another corner, where the former Glamorgan Staff club now stands was the slaughterhouse. Both the cattle market and slaughterhouse moved to the outskirts of Cardiff later in the nineteenth century, leaving the Cattle Market Tavern as the only reminder of the trade that once went on here. In 1905 Cardiff was granted City status and the pub was renamed the City Arms. The present brick-built building was built in the 1880s and in the latter part of the twentieth century expanded into the Labour Club next door. 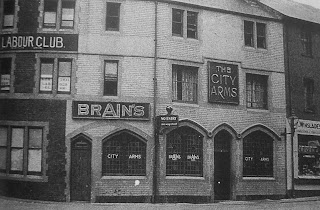 Above: the City Arms in 1935
Today the City Arms is unmistakable with its cream and black exterior and the Brains dragon proudly displayed at the acme of this three-story building. The leaded glass windows have the old Brains A1 logo in dark blue lozenges set in them and the pub sign features, of course, the Coat of Arms of the City of Cardiff. On the inside the central island bar has three banks of gleaming handpumps, one for each side of the bar, featuring cask beers from SA Brain, including the new IPA as well guest beers from brewers across the country but with an emphasis on Welsh-brewed ales with award-winning brewers such as Breconshire and Otley making appearances. 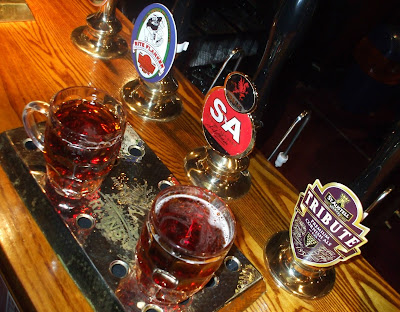 Above: Handle glasses for the beers off the stillage 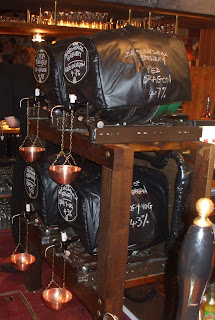 There is also a stillage featuring cooled casks being served straight from gravity.
As well as the real ales there are also brass T-bars serving beers from across the world including Budvar Dark from the Czech Republic and Duvel Green from Belgium and a selection of over 20 different bottled beers and ciders. Altogether the new look City Arms offers  over 35 different beers and ciders. The lists of beers are chalked up on blackboards behind the bar. 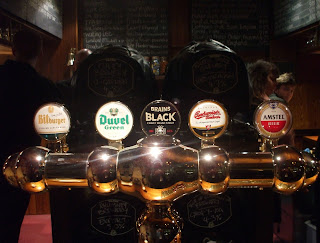 The pub does not do food, apart from crisps and pickled eggs but there are plenty of other places that do in the City Centre. There are plenty of places to sit around the pub and there is even room for a darts board in one corner. The walls are decorated with old photographs, brewery memorabilia and even some Gren cartoons. The City Arms has returned to its roots and become a beerhouse once again.

Above: Some of the beers from across the world available at the City Arms
Google Map:
View Cardiff in a larger map