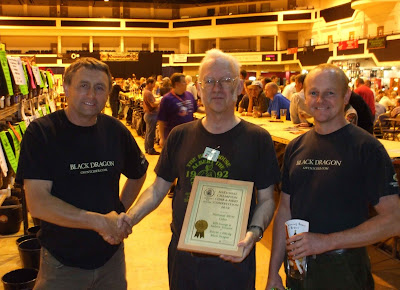 Above Bill George (left) and Andrew Gronow (right) receive their award from CAMRA's Rhys Jones (centre) at the Great Welsh Beer & Cider Festival last month.
A Welsh cider producer is celebrating a series of wins for its Black Dragon cider at Wales, UK, and international level.
Pontypridd-based Gwynt Y Ddraig has picked up a number of trophies in recent weeks, including top honours at the International Cider Competition held at Hereford Museum where their Black Dragon draught cider was judged Champion Cider of the competition – the ultimate award for cider producers.
This followed a silver medal for Black Dragon at the CAMRA UK Competition the previous week and earlier this month Black Dragon won Cider of the Festival at the Welsh Beer & Cider Festival held in Cardiff, beating ciders from across the UK.
Understandably excited by their wins cider makers Andy Gronow and Bill George said: “The award of Champion Cider at Hereford is equivalent to winning the World Cup and so we feel this really puts Welsh cider on the map showing we can produce cider that is equal to any produced in the UK.
“Our Silver Medal from CAMRA demonstrates that our cider continues to appeal to the ‘real cider’ market and this is confirmed by our win at the Welsh Beer & Cider Festival.”
The True Taste Award-winning company launched Black Dragon three years ago and it has proved to be their most popular draught cider. 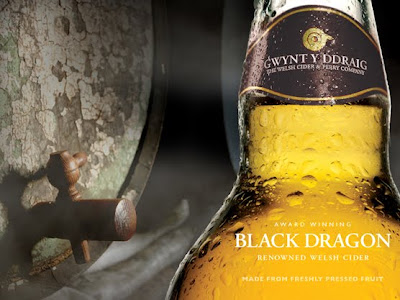 It is an oak conditioned, medium dry cider with an alcohol content of 7.2% abv.  It is a special reserve cider that has been hand crafted exclusively from cider apples grown by traditional methods in ageing orchards in Wales and Somerset.
The juice pressed from these apples is fermented and then matured in oak to produce a cider rich in colour, body and flavour with a fresh fruity aroma.
These latest awards will be added to an already bulging trophy cabinet at Gwynt y Ddraig which since beginning life on a farm in Llantwit Fardre in 2001 has won dozens of awards, including three UK Great Taste Gold Star Awards during 2009 and 2008 for their bottles of Vintage ’06, Yarlington Mill and Orchard Gold ciders.
They produce a wide selection of draught and bottled ciders and perries, which are proving popular not only in Wales but across the UK.
Their cider press was purchased with the help of a Welsh Assembly Government Processing and Marketing Grant and assistance was also given with the corporate design and literature.
Rural Affairs Minister Elin Jones congratulated the company, saying:
“I am pleased to hear of Gwynt Y Ddraig’s achievements. In recognition of the growth in the sector over the last few years, this year’s True Taste Awards have introduced a category for beer and cider for the first time and it is good to hear that Welsh cider is becoming increasingly popular on the UK stage.”
The full range of Gwynt y Ddraig cider and perry including Black Dragon (10L and 20L) can be purchased direct from the farm or on line at www.gwyntcider.com

Tasting notes. Black Dragon Bottled Cider:
Black Dragon is a light golden-coloured cider with a complex aroma of freshly mown grass, ginger and also some oak and spirit, which the cider picked up from being fermented in old wooden whiskey barrels. This cider is made from a careful blend of cider apples such as Brown snout, Norman and Jersey sourced from traditional orchards in Monmouthshire and Somerset. The taste is of an intense, rich almost syrupy apple flavour which envelopes the mouth, followed by a dry aftertaste with some whiskey flavours lingering on the tongue. A well-balanced medium-dry cider packed with plenty of taste and flavour.  Black Dragon excellent match for strong cheese.